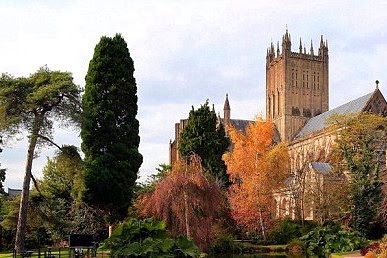 The Church Commissioners are moving the Bishop of Bath and Wells out of the Palace. How good, you might think, to cut bishops down to size and make some money into the bargain...except that they probably won't do well financially. They are putting the new Bishop into a former Parsonage. That Vicarage is one they sold off a few years ago and  they are now buying it back at a much higher price. The whole business reminded me of a couple of other property coups of the Commissioners.
When a house had to be found for a suffragan bishop (of Lynn) in Norwich Diocese, they purchased for him the Vicarage of Castle Acre - at much more than they had sold it for only a few years earlier. There was another even more remarkable piece of dealing. The Bishops of Portsmouth had lived at Bishopswood in Fareham, a large thatched property standing in many acres of land. The site might have been developed, but the Commissioners were put off by the local authority who said the land could not be built on. So they sold Bishopswood and bought a 19th Century house built originally for a Naval Officer. They spent several hundred thousands more than the price obtained for the former house in bringing the new one up to standard.
Drive past the site of the old house now, and you will see it glamorously restored (and rented out very profitably) while many new 'executive' houses stand in the grounds. They appeared there within a couple of years of the sale - so the local authority must have changed its mind about development.
You could say this is no concern of someone in the Ordinariate - except that the one part of the Church of England with which some of us remain in unimpaired communion is the Pensions Board, funded to a large extent by the Church Commissioners. Doesn't Parliament have some oversight of their activities?