York Diocese decided to have a little revival of the Malines link back in the 1980's; I'm not sure of the date, maybe it was 1981, just sixty years after the original conversations had been started by Cardinal Mercier and Lord Halifax. Whenever it was, I was there because many of us who went were chosen because we were elected representatives of the  diocese on General Synod.

Now there is another revival of Malines: Vatican Radio News tells us
"Catholic and Anglican theologians have been meeting together near Rome to discuss ordination rites within the two communions, as well as the significant ecumenical implications of Pope Francis’ recent document ‘Amoris Laetitia’. A meeting of the Malines Conversation group took place from April 17th to 22nd at Rocca di Papa, south of Rome, culminating in an ecumenical evensong celebrated by Archbishop Arthur Roche of the Congregation for Divine Worship."

On that visit from York diocese we met many leading Belgian Catholics. Chief among them was Cardinal Godfried Danneels, at that time Archbishop of Mechlen Brussels; and he has been chairing this new meeting together with Lord Williams of Oystermouth - better remembered as Rowan Williams, one-time Archbishop of Canterbury.

Curiously, there appears to be no-one there from the Ordinariate of Our Lady of Walsingham. I say "curiously" because the erection of the Ordinariates seems to me to be one of the fruits, indeed perhaps a very rare and precious fruit, of the otherwise rather fruitless ARCIC conversations of the last forty-seven years (Really. I have checked - amazingly that is how long ARCIC has existed).

There was a comparable lack of imagination when the Holy Father convened the consultation on the Family. At that time others said how contributions from married clergy might have informed the discussions. Now a similar opportunity has been missed with the Malines revival. It almost looks (surely this cannot be so?) as though the Ordinariates were seen as an embarrassment, to be hidden away from polite ecumenical discourse. From our perspective as members and so insiders, the Ordinariates are a great step forward in ecumenism. When will official Rome and Canterbury also share that opinion?
Posted by Edwin at 07:51 3 comments:

Twisting a Tale of the Ordinariate

That Latinate wonder, Fr John Hunwicke (whom God preserve) has posted a cautionary 'Tale from the Ordinariate' about the experience of a Priest who presumed to replace a "eucharistic service " (curious name, since the Eucharistic Prayer is missing from it) with a real Mass. He was met with considerable annoyance by the lay people ousted from their ministry. I have not experienced that; indeed when I have offered to say Mass on a day usually served by the laity, the extraordinary ministers here in Lymington have seemed very happy to have the Mass rather than simply Communion from the Tabernacle. What's more, if I turn up unannounced on a Sunday and concelebrate with the parish priest, there is a little shuffling about at the back of church while the lay ministers decide who will stand down; but someone always does, to allow me to administer Communion instead of one of the lay assistants on the rota.

We are very fortunate in this part of the vineyard in having a few retired priests around. This morning Mgr Peter Ryan said the Mass of St Mark and I concelebrated with him. He is retired, from the diocese of Liverpool, and has a very busy retirement ministry, On Wednesday I shall be able to give our Ordinariate priest in Bournemouth a little time out - which I expect he will fill with hospital visits since he is Chaplain to the Royal Bournemouth as well as Parish Priest of St Thomas More AND pastor of our Ordinariate Mission. On Thursday I regularly say Mass for Fr Marcin the Polish parish priest in New Milton - and this week I shall also substitute for him on Friday. On Saturday I am usually in Lymington, enabling our Parish Priest to get to one of the other churches in his care. That evening I am also celebrating the vigil Mass of Sunday for him - and on Sunday morning both the Parish Mass and the Ordinariate Mass at St Thomas More, Iford. Never a dull moment - and I know this is very much how things are for my fellow 'retired' Ordinariate priests.

I think some of the Bishops of England and Wales recognise this; but apparently there are some who are a little reluctant to admit that the Ordinariate is a gift to the whole Church. They are content for us to fill gaps; yet I understand they are reluctant to make room for further newcomers from Anglican Ministry. Their argument seems to be that Anglicanorum Coetibus was set up to bring entire congregations into the Catholic Church and they see no need for admitting individual clergy. I believe this is very short-sighted. We have a few seminarians in training, but not enough to fill the ranks of priests who will retire in the next few years. There are some very good Anglican clergy ready to join us; but not if there is no bishop ready to ordain them as Catholic Priests at the request of our Ordinary. I know, for instance, of some Anglican School Chaplains who are contemplating the move. They cannot come with a group of laypeople. There must be an opportunity for such men to be made welcome in the Catholic Church. Perhaps we should all remember what dear Papa Benedict said about the need for generosity towards former Anglicans. Maybe remember too that the aforementioned polymath Fr Hunwicke had been for most of his ministry a School Chaplain. There are also parish clergy who look forward to a move into the Ordinariate.

If there is to be continuity and if the Ordinariate is to fulfil its vocation (spelled out most helpfully by David Murphy in his recent "Reflections" - you can read them on the Ordinariate Expats' blog, 'Ordinariate News') then we must have a continuing stream of priests coming from the Anglican tradition, bringing with them their pastoral skills and particular Anglican charisms. I do hope the hierarchy will be supportive of our Ordinary in ensuring a succession of priests for the Ordinariate.
Posted by Edwin at 06:06 1 comment:

The past few days I've been on Retreat at the Oratory School, led by the Rector of the Shrine at Walsingham, Mgr John Armitage. Five of the priest retreatants were members of the Ordinariate, which was a good proportion. The addresses were good, the prayer time very helpful, but as always I took a book or two along.
One of  those (plucked at the last minute seemingly at random from our bookshelves) was Leslie Paul's "Sir Thomas More" - a short biography which my wife had when she was still at school - so it is not in the forefront of  Thomas More scholarship. One paragraph though caught my attention. Maybe it is because years ago I went to Romania with one of our St Stephen's House Ordinands, to attend the ordination of a young Orthodox priest who had studied with us in Oxford for a year. In one of the churches in Brasov was a map of Europe - England out on the edge, at the centre Romania. During that visit we went up into the mountains of Transylvania. All I knew about that part of Europe was the name of Vlad - whom we called "The Impaler". In Romania though he is a national hero, who saved Christendom from the invading Turks. 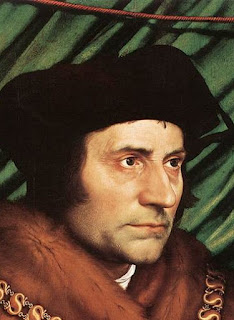 This came back to me as I read a page in Paul's book  on Thomas More - here it is:
"The Papal supremacy was, in More's eyes, the guarantee of the spiritual unity of  Christendom. It was useless to pretend that the Bishop of Rome was just as other bishops; to assert this was to discredit Christ's word to Peter. And if Christendom rally existed, then it must have a head for the same reason that a country had a prince; the head was either Pope, or General Council, or Pope appointed by General Council. If the unity was broken by denying the papal supremacy, then, no matter what justifications might be produced for it, the victory was one for the forces of darkness.They needed little encouragement. More asserted that the surrender to the 'great Turk' within a nation meant ultimate victory for the infidel who was fighting his way up from Constantinople into the heart of Europe in More's own lifetime; and whose menace was so little understood that one Pope at  least was prepared to make an alliance with the Turks in order to defeat his European enemies, and the Lutherans would rather the Turks had Rome than the Popes.Such was the measure of European folly. The papal supremacy and European unity went together,destroy the one and it would be impossible ever again to guarantee the other; disorder and dissension would increase everywhere, and Christ's church itself be endangered. In disowning his debt to Europe, Henry VIII was turning his back on European civilization, and More was virtually the only layman in England who saw what it all implied for the future."

We need a new Statesman of More's calibre to tell our politicians that any deal which would let Turkey into the European Union would be madness; that to speak of "Christian Ideals" without mentioning Christ or his Church is purest fantasy; and that we should discriminate carefully which 'refugees' we allow into the country - persecuted Christians first, then other minorities suffering at the hands of Muslims. Remember history.