Back in the dim past, when I was a curate, I took Communion to two amazing ladies. One of them came to mind yesterday, for she had told me her Grandfather had been a drummer boy at the Battle of Waterloo. Now this picture is not of that boy - but we visited Somerset House, and there they have a small exhibition of photographs of battle re-enactors in uniforms of the period. Somerset House is surely the grandest setting in London. It outdoes Buckingham other Palace by a mile. Greenwich is the only contestant, and that is not really in London at all.

So we spent a happy half-hour looking at the pictures. They are beautifully displayed on a background of scarlet cloth; the very fabric from which British Uniforms were made - and astonishingly produced in the same Yorkshire mill which made the stuff to dress those 18th and 19th century soldiers


The Buildings have been used for all sorts of purposes- picture galleries, record offices - today it helps fund its own preservation and restoration with private events. Yesterday the central square was filled with scaffolding and stages, sound and lighting equipment - all for some private party to be held there tonight. There is also some restoration work beginning in the Northeast corner. Some of the carvings are certainly showing their age. Many of them have a nautical look. 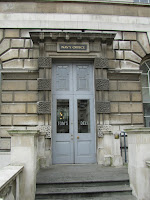 That is only right, because this was also the home of the Navy Office - it was on this site that Sam Pepys would wait upon their Lordships of the Admiralty. The present building dates from a century after Pepys' time,  but replaces a Tudor palace. The Navy Office still proclaims itself over the door; but this is now a way into a cafe - just as Greenwich, originally built as a hospital for wounded sailors, is now a Museum and part of a University. (Oh, and another Pepys, Christopher, became Vicar of St Mark's Portsea soon after I left that title Parish - but that is another story)


It always strikes me how very short is recorded history. I said one of those two home communicants had a grandfather who had fought at Waterloo.The other had herself been prepared for confirmation  by Father Dolling of Portsea, whose ten years in a Portsmouth Slum were at the end of the 19th Century. [His church building, you may know, now houses the Portsmouth Ordinariate.] That lady had imbued some of the spirit of Fr Dolling. When I once unwisely asked if she kept in touch with any of the series of curates who had taken her the Sacrament. She responded, "Certainly not! You enjoy a priest while he is here,and you pray for him after he has left". I think those prayers helped me through later years - and certainly her admonition warned me against that clerical disease, wanting to be liked!

She who must be &c asked for Winchester for her birthday, so Winchester it was. After days of drizzle she also ordered the weather, fine and warm. We began with a walk along the river to Wolvesey and Winchester College. Then a bit further down stream where the swans came looking for food.

En route we passed the house where Jane Austen lived out her last days, and duly saluted her shade.
You can't bumping into history wherever you walk in Winchester. Near the river, a section of the city wall built by the Romans around 70 AD. Beside the Cathedral the remains outlined in stone of the earlier Saxon Minster. The Deanery is a remodelling of the Abbot's House; and thank goodness Winchester does not proclaim its church "The Cathedral and Abbey Church" as they insist on doing at St Albans.

Beside the former Abbot's house is a redbrick extension built in the 17th Century - it is said to enable King Charles II to take exercise indoors when he visited. He began work on a Palace in Winchester, perhaps even intending to move his court from London - for Winchester had been the ancient capital of Wessex, the seat of Alfred the Great and many succeeding kings. Charles saw from the Deanery a very convenient  house,and asked the resident Prebendary if it might be possible for Miss Gwynne (Nell, Charles' mistress, no less) to stay there when she visited the King. To which the King received a terse "Certainly not!" - and Charles was so impressed with his integrity that when the See of Bath and Wells fell vacant he asked "Where is the good little man that refused his lodging to poor Nell?" - and duly had him appointed. Now where are the Churchmen or Women today prepared to say 'No' to those in power rather than condone their sin?


The Kingdom of Portugal was full of Religious. Then in 1833 all monks and nuns were ousted - just as had happened in England three hundred years earlier. Curious how the 'enlightenment' brought with it such drastic changes. In France it had been the monarchy which symbolised everything old and bad; but the Church was seen as a part of the system. Accordingly the Church suffered along with the Royal Family. The guillotining of Dominican nuns was just one of the more barbarous events. It took another eighty years for Portugal to rid itself of its king. So now the country is full of empty convents and empty palaces - just places for tourists.

It can all happen so quickly. For two centuries the Knights Templar had been one of the most powerful, and most popular, of religious Orders, Tomar in central Portugal was one of the greatest monasteries of the Order. You can still see the great bakery where bread was baked not just for the brethren, but also for the many who came to the door seeking charity. With the failure of a Crusade, the French King took the opportunity to blame the Templars, and then leaned on the Pope to disband them. In England Henry VIII had blackened religious communities in order to seize their goods; and as in Portugal, it was the poor who suffered, with no one to feed them, nurse them in sickness, or educate them. The hatred of Religious and of the Catholic Faith so instigated by Henry and Elizabeth continue even to the present.
By a strange chance I had picked up in the Heathrow Airport Bookstall "The Buried Giant" by Kazuo Ishiguro. That is set in the time of the Saxon invasions of Britain, and gives an extraordinary account of the success of Arthur in uniting the country, only to see it divided and the Britons driven into the far west after his death. The Saxons had come wanting to simply to share what Britain had to offer; instead they managed to supplant its ancient culture.

In Tomar we also visited the Synagogue; which had functioned for just twenty years before Ferdinand and Isabella expelled Jews along with Muslims as part of the 'reconquest'. And now 'Isis' is trying to establish its caliphate ... how long will England hold out against it? North Africa, Turkey, Egypt, Syria - all were the home-lands of Christianity.

At the end of our stay in Lisbon we visited the Cathedral; they have been excavating beneath the cloisters at the east end of the church.


Roman streets, Moorish buildings (there was even a Mosque where the Cathedral now stands) and much more yet to be revealed. Everywhere in Portugal there is devotion to St James [of Compostela,] called 'the Moor Slayer'. And in Santiago itself, depictions of the beheading of the Franciscans who had attempted to convert the Muslims of the Holy Land.


Where is Thy reign of peace,And purity, and love?
When shall all hatred cease, As in the realms above?
When comes the promised time That war shall be no more?