Old haunts for a day off: Jane had trained as a teacher in Portsmouth, her second job was at Arundel Street School. While she was there we met - I was serving my title in the City at St Mark's in North End. Today though it was the Navy which occupied us - a visit to the 'Historic Dockyard'. During our time (heavens - more than fifty years ago) the Dockyard was still expanding - it even swallowed up St Agatha's Portsea. Now it has shrunk drastically; 'Gunwharf Quays' is a shopping experience, and much of the rest has been handed over to the heritage industry. A harbour boat trip set us thinking.

The Romans had seen the importance of the great natural harbour, and built their Castle at its northern end. The Normans after their invasion fortified the castle, built its keep and a church within the walls. In Victoria's reign Lord Palmerston persuaded Parliament of the need for a chain of forts; on the hills behind Portsmouth and out at sea; one of these is now a hotel, where you could stay overnight for something over £200. They are known as Palmerston's Follies.

With these static defences there were also ships. Henry VIII had the misfortune of seeing his flagship the Mary Rose sunk during a battle with the French just off Southsea Castle. We could not see her today; she is having yet more money spent on her preservation in the recently constructed museum right next to Nelson's flagship, Victory. That vessel too is being restored once more; her masts are down so she looks a little ragged.

We did, though, go on board Warrior. She and her sister ship (long since scrapped) were State of the Art vessels in 1860. Even now the scale of her boilers and engines is astonishing. Within thirteen years she was out of date, and began a downward spiral.Then in the 1970's she was rescued, and many millions were spent on her restoration. Today once again heritage lottery money (£2.5 million in the latest fork-out) is paying for more work. All this expenditure on heritage is no doubt very commendable. But what about the Navy of today? As we went round the harbour there were just four vessels which are still in commission. One of them, a destroyer. is, I think something of an embarrassment to the MOD. Cheese-paring had meant the engines originally fitted were not up to the job, and are having to be replaced.

I love the Royal Navy. My father served from Boys' Service (in 1926) until he was invalided out a couple of years after the war. He had been on submarines before the war, and on destroyers throughout the Russian Convoys. In that campaign he was mentioned in despatches, and carried shrapnel in the back of his neck until he died. His last commission was on a netlayer, HMS Guardian, one of the smallest ships in the fleet. Some of my happiest childhood memories were of being taken on board ships - the smell of tar and engine oil is tremendously evocative of those days. Eating in the Wardroom (a rare event) was incredibly special.

I wonder though if the admiralty has its priorities right. There are more admirals in the Navy today than there are ships in commission. Huge sums are being spent on two aircraft carriers - but not yet on the aircraft to fly from them. There is wrangling about replacing the ageing fleet of nuclear submarines.About all this there is a whiff of Palmerston's follies - no shot was ever fired in anger from any of them. Perhaps though that was the point; they were a deterrent.

One place that really thrilled us on our visit was a great shed where old craft were being restored or re-created. There they undertake training courses for people wanting to learn about boat building, and on display are many different craft - a boat from a Royal Yacht, a two man midget submarine (the cockle-shell heroes), all manner of small tugboats and sailing vessels. At Dunkirk it was largely amateur sailors who risked their lives to rescue troops from the beaches. Maybe one day we shall have to look again to our volunteers, when the Navy has shrunk too small to keep us safe.

The first child said Shrove Tuesday was about pancakes. The second thought that Ash Wednesday had that name because we eat Hash on that day. 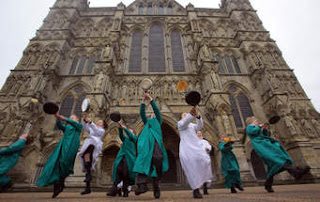 That's about the limit of popular understanding of Christian Festivals and Fasts in England today. Just occasions for eating particular foods. So the shops are full of Easter Eggs just now -   if you wait until Easter they will probably be half price since no one will want them then. Hot Cross buns you can get at any time. The eating bonanza above all others is of course Christmas; when throughout the time leading up to Dec 25th you can get special restaurant meals - unavailable after that date.

So today, when she was offered special cut-price chocolate and replied. "Sorry - I've given up chocolate for Lent" she who is generally obeyed was quite pleased when the assistant paused and said "Lent? That's something to do with Easter isn't it?" At least he seemed to have more of a clue than the Anglican diocese of Leicester, who appear to think Ash Wednesday is 'cup cake day'. Maybe evidence that the Church of England really is the fruit-cake church. Happy Chinese New Year!
Posted by Edwin at 11:37 No comments: