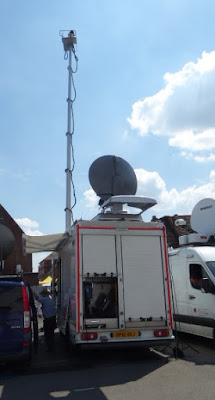 Once again, for the second time this year, Salisbury has been attracting the Media, There has not been such excitment since the town moved from Old Sarum down into the watery valley where the rivers Nadder, Ebble, Wylye and Bourne join forces. Or perhaps since June Osborne was appointed Dean of its Cathedral. Once the move down the hill had been made, and once June was wished on the poor folk of Llandaff, life settled down again in Salisbury.

Now the excitement is all happening again - apparently because a couple of poor drug addicts picked up something missed on the clean up after the first Novichok scare - at any rate, that is what we are being told.  It is perhaps remiss of me, but I can't get terribly excited, any more than I can join marches for or against Brexit. Corporal Jones of  Dad's Army has the right words for us - Don't panic, don't panic,

Perhaps it is the result of a long life that leaves me pretty unmoved. I can just remember the anouncement on the wireless (radio, to you) of the declaration of war in 1939. My father served on destroyers on the Russian convoys, [ironic that he was helping save the Russians?] and was metioned in despatches. We went to whichever port he was in. Thus we were bombed out of
our digs in Birkenhead and almost killed, and bombed out again in Greenock. Meanwhile our belongings left behind in Devonport were all lst through bombing, as was my first school. I changed school eight times between the ages of four and eight. After the war father was invalided out of the Navy, his health permanently shatered.

Those of my generation lived through the war and the austerity peace. We heard about the Bay of Pigs and the threat of the Hydrogen Bomb - but then we had sheltered in concrete bunkers and in tin huts in the garden, we had carried our gasmasks to school, we had heard bombs falling and seen doodlebugs hurtling out of the sky onto some poor unsuspecting souls, and the Festival of Britain .and the Coronation lifted our spirits. The again, we have lived through the self-destruct period of the Church of England, choosing to ignore its catholic heritage and  gladly accepting bondage to the spirit of the age.

Yes, we have prayed for the first victims of the Novichok nerve  agent, and shall pray for the more recent two now in Salisbury Hospital. We shall pray too for the overworked hopspital staff, for the police drafted here from their homes in other parts of the county, for the cameramen and broadcasters who are bored almost to death waiting for something to happen, for the scientists at Porton Down and for the small traders in Salisbury who have been losing business ever since March.

Perhaps most of all though we need to pray for a sense of proportion in our Nation. A nerve agent attack is disgusting, but it is not a reason to go to war. Brexit may be tedious, but within a few years we will have adjusted to whatever outcome prevails. Lady clerics came and go. Another rather tedious religious lady, Julian of Norwich, made her motto something like Corporal Jones'; "All shall be well, and all shall be well, and all manner of things shall be well." So don't worry, and don't panic. If you want to help Salisbury, come and visit us here (not a long journey from Waterloo); marvel at the Catholic Dean and Chapter who had the nerve to build the Cathdedral in the early 1300's, [but don't pay to go into the Cathedral; it is just an empty shall, a carapace as Dr Stephen Morgan has it] enjoy the Market (Tuesdays and Saturdays) with its charter almost as old as the Cathedral, the Mediaeval sreet plan and the half-timbered shops. As for me, I am saying Mass at 7 this evening in St Osmund's our Catholic Church opposite the Cathedral, but beyond the precinct wall. I shall try to ask our Good Lord to put our little tribulations into some sort of perspective for us - sub speciae aeternitatis.
.
Posted by Edwin at 08:37 2 comments: