The Eyes have it

Well there you are, history rewritten - supposing you watched the first part of Wolf Hall. There was the saintly Thomas Cromwell, honest and upright, devoted to the English Bible, bearing nobly the death of his wife and daughters - oh, and he had wanted to teach her Greek too - how very Humanist of him! You might say just like Thomas More and his Family - except that here we have already been shown what a dastardly fellow More is .. at least in the opinion of convent-educated Hilary Mantel. Not content with blackening him, we also have seen her show Stephen Gardiner as a real snake in the grass.

Now in that I feel Ms Mantel has gone little too far; just because he upheld the faith which England had always held, she must show him as a complete rotter. The photography was marvellous, lots of chiaroscuro; not so the characterisation, all either utterly black or purest white.

The pity is, a picture is worth a thousand words; and we shall see many such pictures over the course of the next five episodes. They are likely to distort people's opinions for years to come.  For me, though, the more accurate picture is given us by a contemporary, rather than an embittered would-be historian. So which of these men would you sooner trust?

Or the persistent Catholic who preceded Cromwell to the block, and who has been declared a Saint of the Church?

After a family party in Dorking on Saturday night, where to go to church next morning? We decided to head into town, to find the Precious Blood, London Bridge - one of the two Ordinariate churches in the Great Wen. Dorking to London is not far on the map; but on a Sunday morning it was a nightmare. Why does anyone try to drive in London? They cut off roads which appear continuous on the map, others they make one-way - always the opposite way to where you heading. After some interesting diversions, we made it, with ten minutes to spare.

It was, though, worth the journey. A marvellously diverse congregation, and an example of how the Ordinariate might develop. Apparently the church had been in danger of closing until the Archbishop of Southwark and Mgr Keith decided to put an Ordinariate priest,  Fr Christopher Pearson, in charge. There were enough former Anglicans not to be simply swallowed up by the existing congregation, Fr Christopher had experience of that part of London in his Anglican days, and both communities have come together very happily. 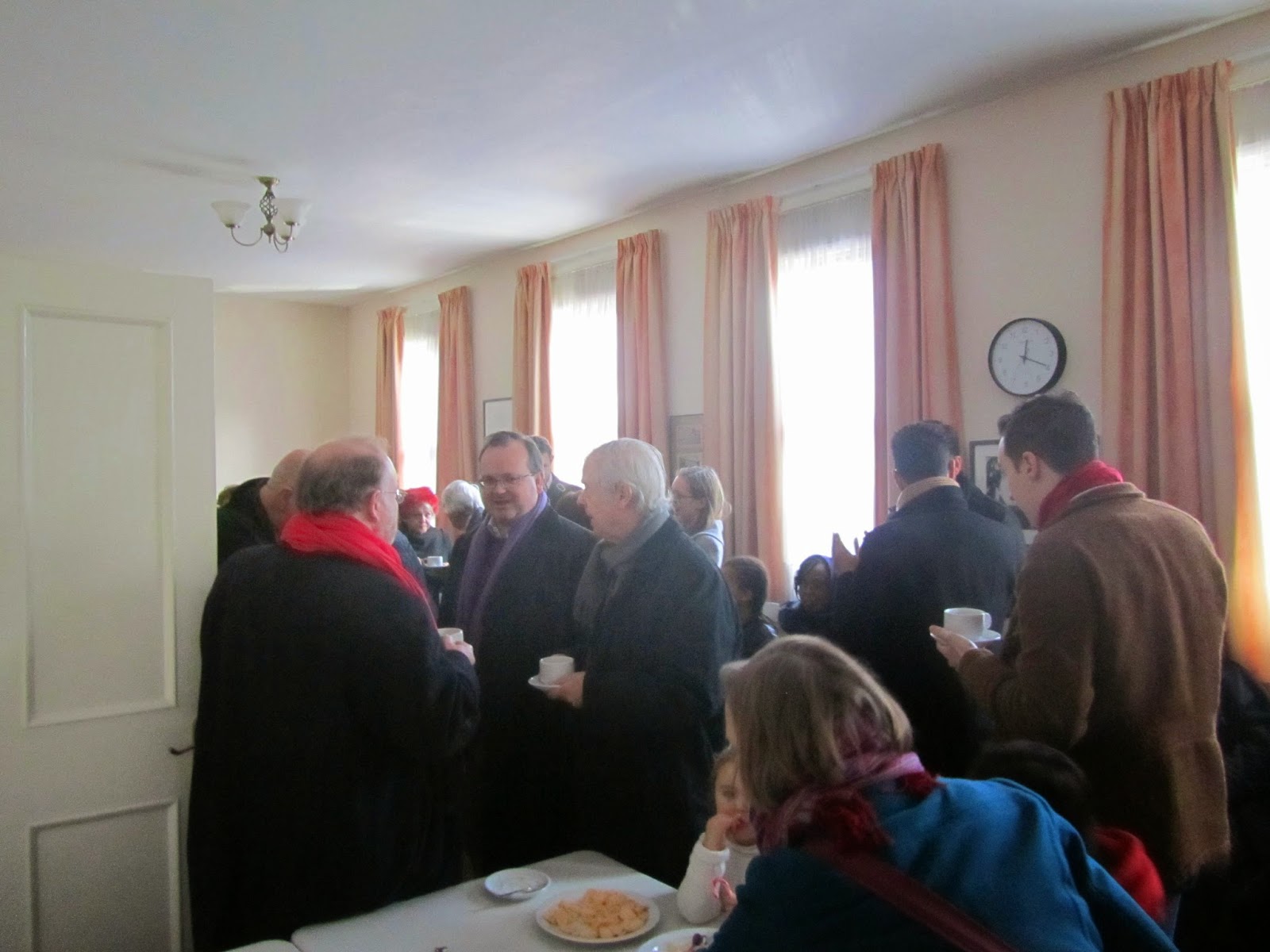 Father gave me the privilege of being Principal Celebrant, which I enjoyed - I hope others did too. Then there was a little more patrimony; the bunfight. I did not quite workout the geography of Church and Presbytery, so I was not clear if we were in the house or the sacristy,but it was all very jolly and we met many people, among them some old friends. Antonia Lynn (trained at a certain House in Oxford) travels in from Ewell, and others come from a distance to find lively worship offered in a recognisably Anglican Manner (recognisable, that is, if you were a well-instructed Anglo-Catholic.) 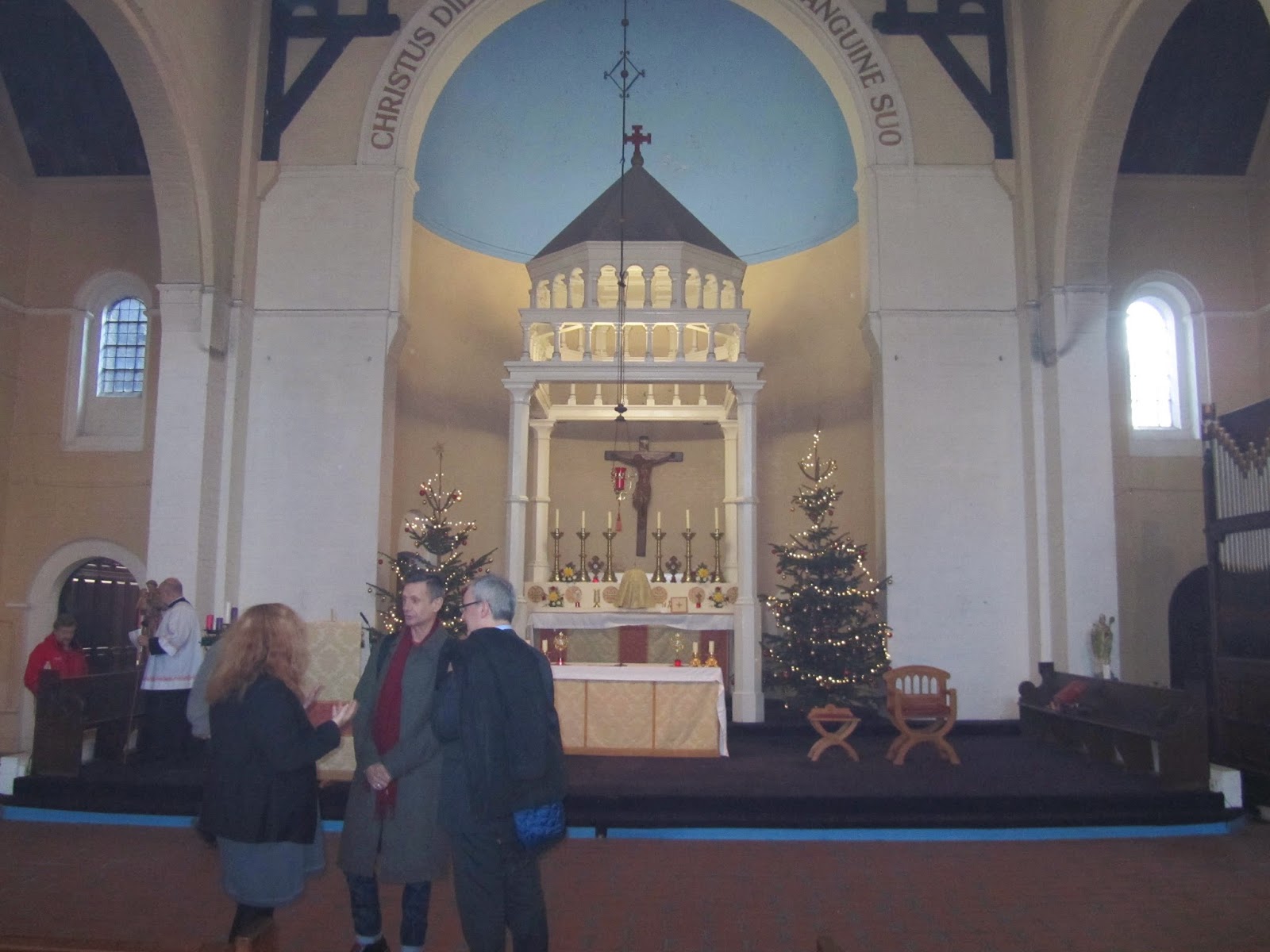 We were given more hospitality - lunch in a pub in Tabard Street-  shades of the Canterbury Pilgrims. 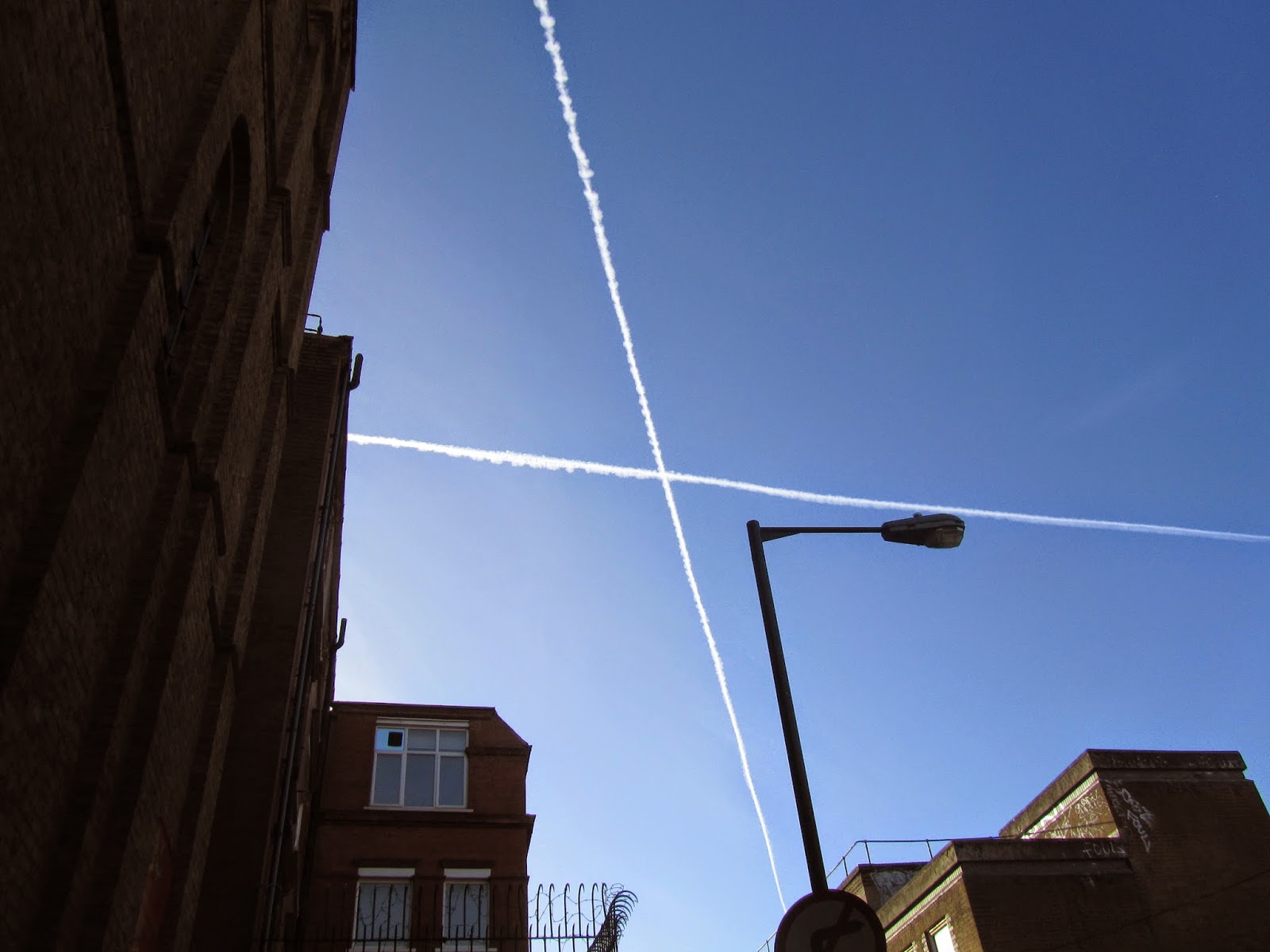 Then we set off for home and found ourselves entangled in the cars of home-going shoppers as we crossed Southwest London, so that the journey was even more wearing than getting to O'Meara Street in the morning. But it was STILL worth the trip. As if to encourage us, we'd been given a SIGN in the sky outside church - disappointingly there was not also "In hoc signo vinces" but perhaps that is just understood.

After Mass this morning in New Milton, children were gathering at the crib. One family told me they were visitors, from Byfleet. I knew it well half a century ago, when I served my second (Anglican) curacy in the parish of Woodham, with responsibility for the church on the Sheerwater estate. The visitors told me the Catholic church on the estate had closed down; and so had the one in Byfleet, so they had to travel to find a Mass near their home.

In some dioceses churches have been able to be kept open because there are Ordinariate priests to serve them. In our own area  St Thomas More parishioners have a former Episcopalian priest, now in the Ordinariate, looking after them. He is one of several ex-pats in Portsmouth Diocese, indeed New Milton has a great young Polish Priest and there are two Nigerian clergy nearby.

Whereas the Catholic Church suffers, in this country at least, from a shortage of priests, in the Church of England it is congregations which are declining. I doubt if many churches in the C of E would have had sixty at a morning eucharist -  yet we had that many at New Milton today. So if Anglican clergy find it hard to face a move into the Ordinariate, perhaps they might listen to an appeal to "come over to help us". Of course they must first believe what the Catholic Church believes - but already there are many who do, except that they also think that their church is still somehow an authentic part of the Catholic Church. 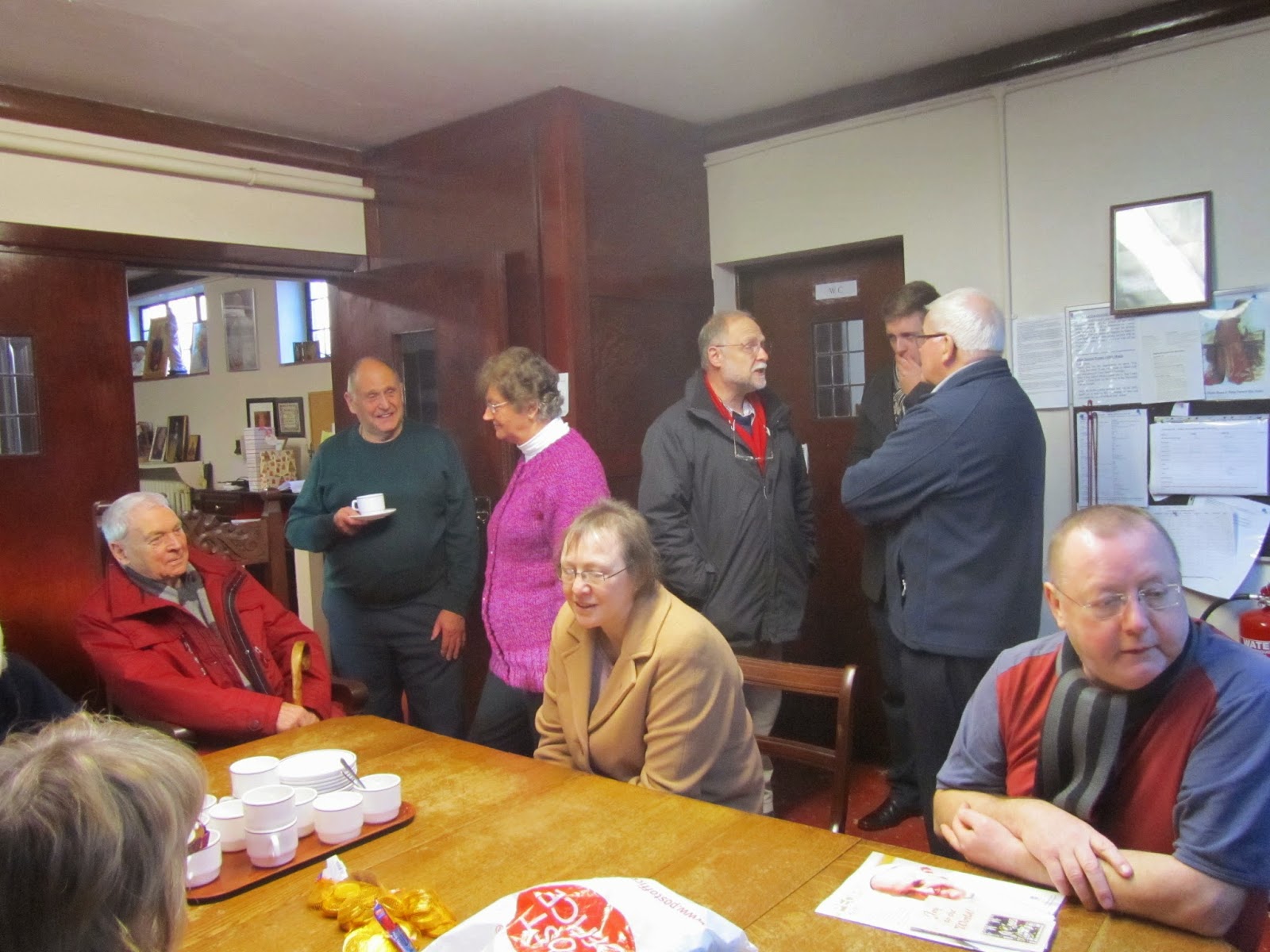 On another tack altogether, it was very good being with our Ordinariate Group yesterday in Bournemouth. One of its best features is the fellowship we enjoy after our mid-week Mass - so I though you might like to see a few of us gathered round the coffee and biscuits on the last day of the old year. 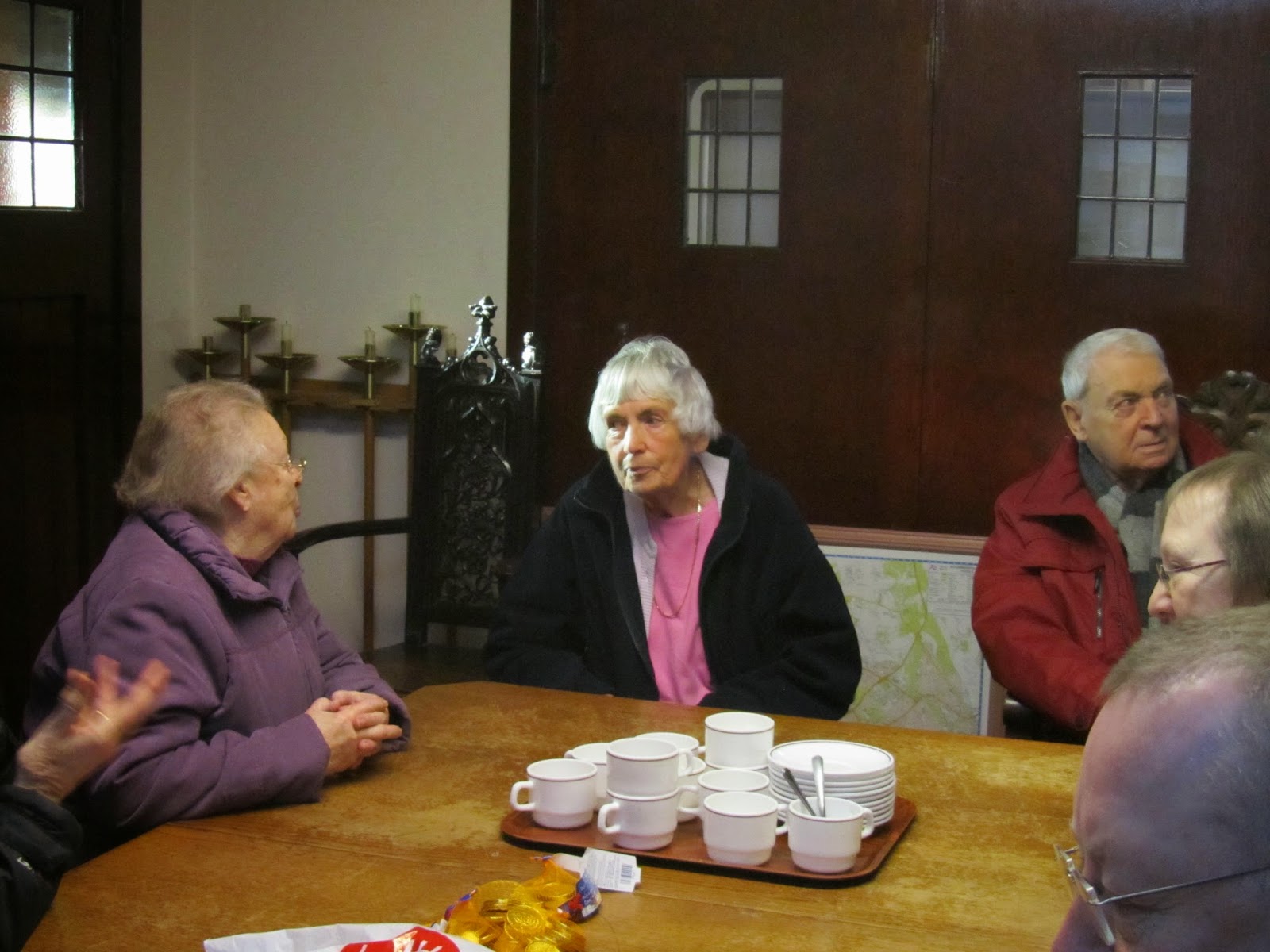