Busy week: the Bournemouth Ordinariate had a bring-and-share lunch party, in the home of Mary and Martin Taylor. Their garden was lovely in the perfect summer weather, so we were able to spread ourselves through house and garden. The pictures will tell it better than my mere words . It was especially good that Fr John Lee was able to be with us (along with several other old friends). Fr John prepared most of the members of our Group for reception into the Catholic Church, and has been a great pastor and counsellor to many of us. Soon he is to move on from his parish in Christchurch to a parish in Maidenhead, in the far north of the diocese. We shall miss him greatly.


Our Welsh grandson was staying for a few days while his parents went on a course together - learning how to build eco-homes with straw bales (honestly). Huw and I went swimming together in the sea at Barton a couple of times (no pictures from there, mercifully) and on Friday had a great day at Marwell Zoo - pity we need the excuse of a young person to visit such places. Besides the animals there were diverse model Dinosaurs which roared and flapped wings and generally looked terrifying. Great fun

Some while ago I was posting what might be thought marginally political matters: and I was told by a very senior member of the Ordinariate that I would be well advised to stick to gardening - which you, dear reader, will have noticed I have done. Nothing about the present state of the Church of England, no comments on the 'ordination' of women as bishops. So it came as something of a surprise - a pleasant surprise I must own - to find Mgr Burnham breaking his own rule and blogging about the Church of England's recent adventure in modernity.

Of course, he did not sink so low as to create a blog himself; instead he let Fr Tomlinson do it for him. I was particularly struck by this paragraph attributed to Mgr Burnham:   'The position of those opposed to women’s ordination is respected. Once more they are said to have an honoured place and it would be churlish and discourteous to point out that, in this matter, rhetoric has always been stronger than practice in the twenty years since women have been ordained priest in England. The important difference now is that the language of reception and communion have been largely ditched in favour of the language of tolerance.' All of Mgr Burham's piece is well worth reading, and I trust that the author of "Consecrated Women?"  and the many other Anglo-Catholic leaders who were until very recently saying that "A code of practice will not do" are busily reading it - unless they genuinely are now very happy with the code of practice (for it is nothing more) that has been offered them.

I suppose Mgr Burnham's essay struck me particularly, since like him I had been a flying bishop. How truly he observes that rhetoric has been stronger than practice in regard to giving Anglo-Catholics an 'honoured place'. Like me he will recall the women Directors of Ordinands who made it impossible for men to proceed as candidates for ordination unless they denied their belief that Christ instituted a male episcopate (and presbyterate) when he set apart the twelve Apostles. Like me he will remember battles over presentation to livings of traditionalist candidates when there was a woman Archdeacon overseeing it.

But all that is now over. We sought an honoured place because we thought that the Church of England really was part of the One, Holy, Catholic and Apostolic Church, and all that was needed was to remind her of her vocation. Now that is no longer possible. Instead of being a voice recalling the Church of England to her roots, Anglo-Catholicism s now reduced to being simply a tolerated minority, expected very soon to die out when it has once experienced the reality of women in the episcopate.

It will be a very gentle process. After all the facilitated discussions of the past year, everyone knows how valued Anglo-Catholics are. They lend a bit of colour to the scene, and because they are so obviously wrong they can be put up with - for a while.

What a relief not to have to concern myself with all this any longer, now that I am a Catholic priest in the Ordinariate. Certainly we must continue to pray for our brothers and sisters in the C of E, especially those of a 'catholic' bent. There was a time when Bishop (now Mgr) Broadhurst would say “don’t trust a bishop – even me”. But of course women bishops will be entirely different, totally to be trusted. None of them will ever bully their priests into toeing any sort of official line. They will be quite different from any of  their predecessors; or indeed from any women in positions of authority in the Church up to now. They will be models of generosity, and no Anglo-Catholic will have anything to fear. He will be treated equally over matters of preferment, there will be a new swathe of traditionalist bishops from both the Catholic and the Reform wing....

Oh dear, I am quite overcome at the wonderful prospect opening out for the future Church of England. I really must get back to my garden.

That was some weekend. Our Bournemouth Mission was present throughout, which meant that several events were entrusted too us. One of us read a lesson at the Pilgrimage Mass, others brought up the elements. We led Morning Prayer in the Parish Church a couple of times and on our last evening Benediction was attended by many other pilgrims.

We had wondered whether our Ordinary would be present; Mgr John Broadhurst was standing by in case he could not make it. In the event he came straight from Liverpool and his mother's funeral. Despite thundery showers all day, the procession from the Anglican Shrine was completed in the dry.

Our Bournemouth contingent was one of the larger ones attending; there were some noticeable absences this year but for all that the Church of the Reconciliation was comfortably full for the Mass (at which Mgr John preached). Fr Alan Williams, the Administrator, had already left to prepare for his Episcopal Ordination on Tuesday. His appointment to Brentwood is great news for the many Ordinariate priests in that diocese. 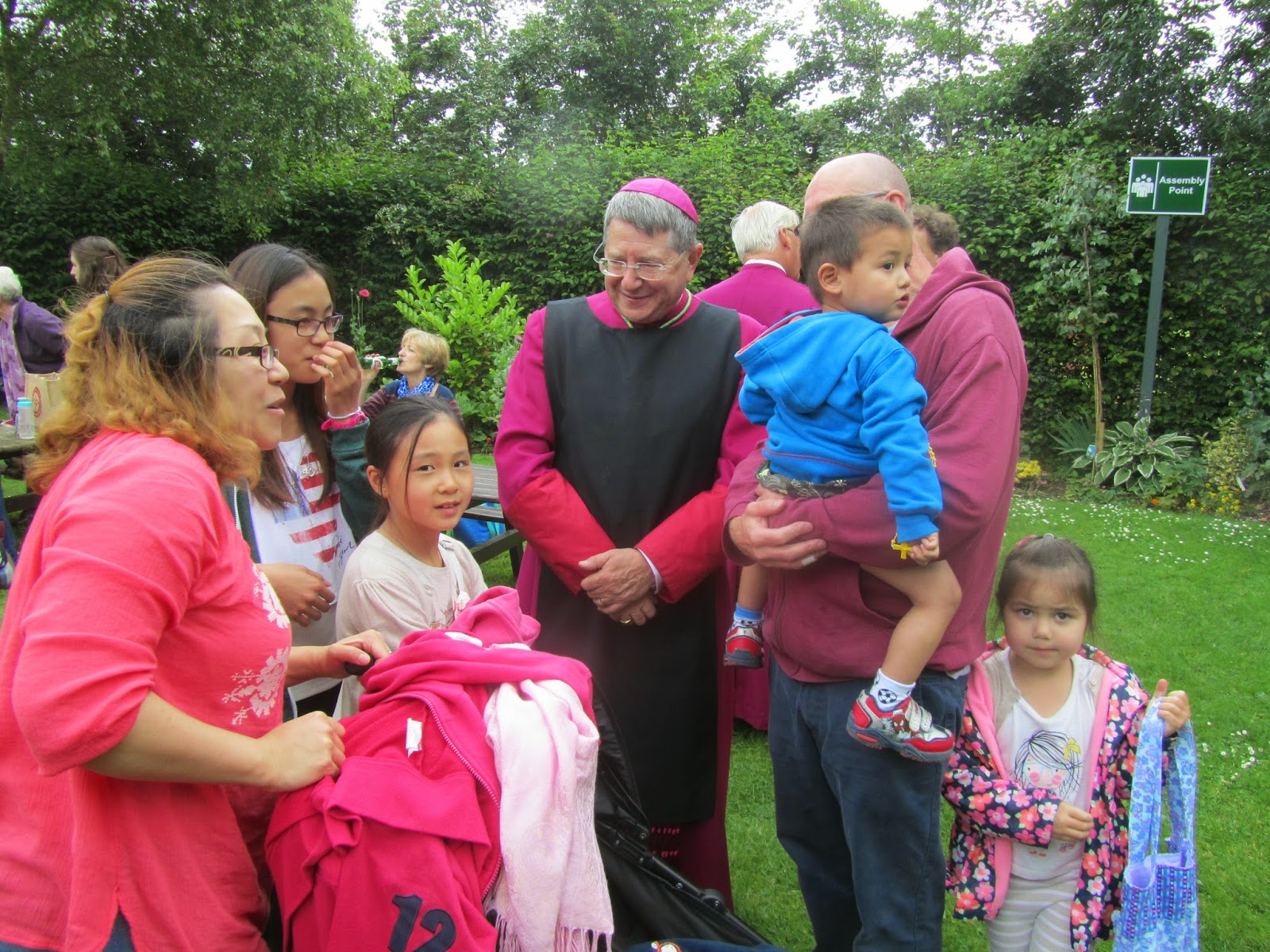 This is the latest family to join our Bournemouth group. Here Dennis and Sherlyn and their six lovely children are meeting Mgr Keith. Walsingham is such a good place for catching up on old friends and meeting new ones. As in previous years, Bishop Lindsay made us all very welcome at the Anglican Shrine, and once again many of our Catholic pilgrims found the candlelight procession and evening service which he led one of the highlights of the pilgrimage.


One the way home we stopped off at Clare Priory. It is one of only two pre-Reformation houses once again occupied by religious of the original foundation - the other is Aylesford. Clare was the first Augustinian house in the country, and the Friars returned there in 1952. after a break of a little over four centuries. The church was an original monastic building, but was only converted into the Church when the Friars returned - the original Church had, like so many others, been used as a source of building materials by the locals. Last year it was greatly enlarged with a handsome new wing, to accommodate not only visitors but also the local Catholic congregation, for whom it is their Parish Church. 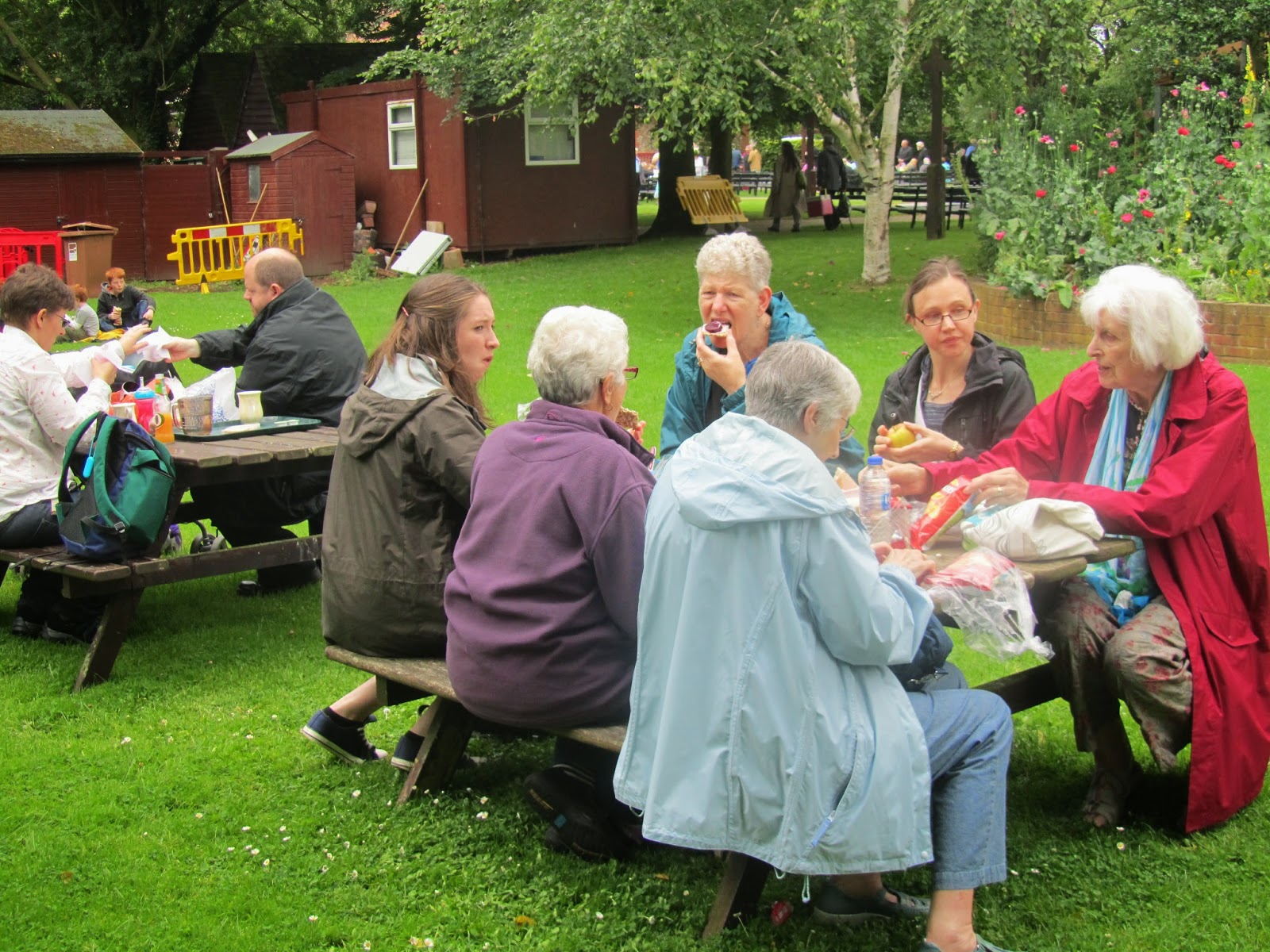 As always, Walsingham was a great opportunity for renewing old friendships and making new ones. What's more the rain held off for our picnic lunches.
Posted by Edwin at 13:50 No comments: