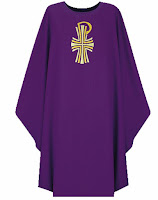 Green to purple in a rush tomorrow. In St Thomas More, Iford, the Parish celebrates the third in Ordinary Time (heart-stirring title) and within minutes the Ordinariate will be keeping Septuagesima in its customary purple. Good that we were permitted to renew some of those old titles - not least because for us this is a countdown to Lent, a time for preparing 'to starve thy sin, not bin' (Herrick), the third before Lent.

It is good to have such distinct ways of celebrating in the Ordinariate. Perhaps the time will come when we shall be trusted to exercise a little more freedom, for instance in restoring the Ascension and Epiphany to their traditional dates, rather than shunting them off to some already occupied Sunday.

There are more important things, though, than these liturgical niceties. If Anglicanism's greatest gift is to take root in the Catholic Church, then some day it must become usual for married men to be ordained, rather than simply permitting this as an extraordinary event needing special dispensations. Fortunately we have a married Ordinary in England, who understands this rather better than others, even bishops, might do.  Not that marriage has always been simply taken for granted among Anglican clergy. When as a curate I wanted to become engaged I had to seek the permission of my training Vicar, and of the Bishop. Perhaps that no longer happens, but it certainly did in the '60's in Portsea.

Today I met a layman who works in another diocese, promoting youth work. He said how he knows several married former Anglican priests. They seemed to him more 'rounded' (his word) than many Catholic priests, with a real generosity of understanding of the human condition. He did not mean to denigrate the celibate Catholic clergy; they had their own special charisms. But it was something he reckoned was a gift, coming into the Church through "Anglicanorum Coetibus". If that is true, and I hope it is, then it seems to be part of the 'patrimony' which we are enjoined to share with the rest of the Catholic Church. Pope Francis has spoken of the need for us all to be ready for change. Such a change might begin in a very small but important way by seeing clergy wives not as an embarrassment to be tolerated, but as a great gift to the Church. Just an idea....