Liturgy: the work of the People


“We do not come to the Church to celebrate what we have done or who we are. Rather, we come to celebrate and give thanks for all that Almighty God has done, and continues in His love and mercy to do, for us.  What He does in the liturgy is what is essential; what we do is to present our ‘first fruits’—the best that we can—in worship and adoration. When the modern liturgy is celebrated in the vernacular with the priest ‘facing the people’ there is a danger of man, even of the priest himself and of his personality, becoming too central." 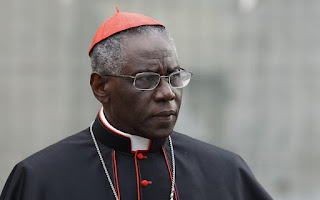 Of course Cardinal Sarah is right. There are these dangers in vernacular liturgy celebrated facing the people. I could wish though that the good Cardinal had also pointed up some of the dangers in a liturgy not "understanded of the people" (Cranmer, I believe) and also in 'ad orientem' celebrations.
It is possible for a mass to become so liturgically correct, so observant of every foot-note in Fortescue and O'Connell,  that those celebrating (not least, but not only, the Servers) can lose sight of what they are about. I have witnessed 'North end' celebrations in the Church of England which were deeply devout and prayerful. Equally I have seen priests celebrating Mass facing the apse who have been quite switched off - and certainly inattentive to the needs of the worshippers as they gabbled the Latin and dropped into supposedly pious inaudibility, while self-important servers fussed about the altar.
When we began to adopt the westward facing Eucharist in my CofE days I tried, with my curates, to recognise some of the pitfalls of that change. We spent time together with members of the congregation working out how best to introduce liturgical change. Yes, one could become too informal, more a ringmaster than a celebrant. It was more important than ever to focus on the sacred elements rather than on one's fellow worshippers. Those dangers are still present now that I am a Catholic . Attentiveness, attention to the text, clarity of speaking, refusal to rush, all these and more are needed to give the Mass its proper dignity. There is no place for idiosyncratic modes of speech, or elaborate gestures.
The Ordinariate, I hope, brings with it as part of its patrimony a reverence for "the beauty of holiness". But this does not depend on choreography of Byzantine complexity, Latin vestments more suited to the Knave in a pack of cards than to the reality of the human body, or language from fourth century Rome or sixteenth century England. Repeatedly through history there have needed to be reforms, usually of over-elaboration and clericalism in worship which have treated the laity as mere pew-fodder. We should be grateful to Cardinal Sarah for reminding us that all our worship ought to be focus on the Almighty. Perhaps, though, his particular remedies are only suitable for relatively few Cathedrals and greater churches. More important by far is to get the music sorted out. Drop the meaningless ditties of the 20th Century or the maudlin attention to death of the 19th. Restore to the Catholic Church some of the treasures of hymnody and psalmody from previous generations [and our own], and there is a chance that the people will discover something of God in the Church's worship. For where two or three are gathered together in his name (and no advice in scripture on which way they should be facing) there is the Lord in the midst of them. (Matt.xviii 20)
Posted by Edwin at 14:20 No comments: