Roses all the way

The mastermind who conceived of the gardens was Graham Thomas. The wonderful yellow rose that bears his name is not yet out at Mottisfont, though we have one in our garden which is in full bloom. There is also a lonicera - a honeysuckle - named for him. 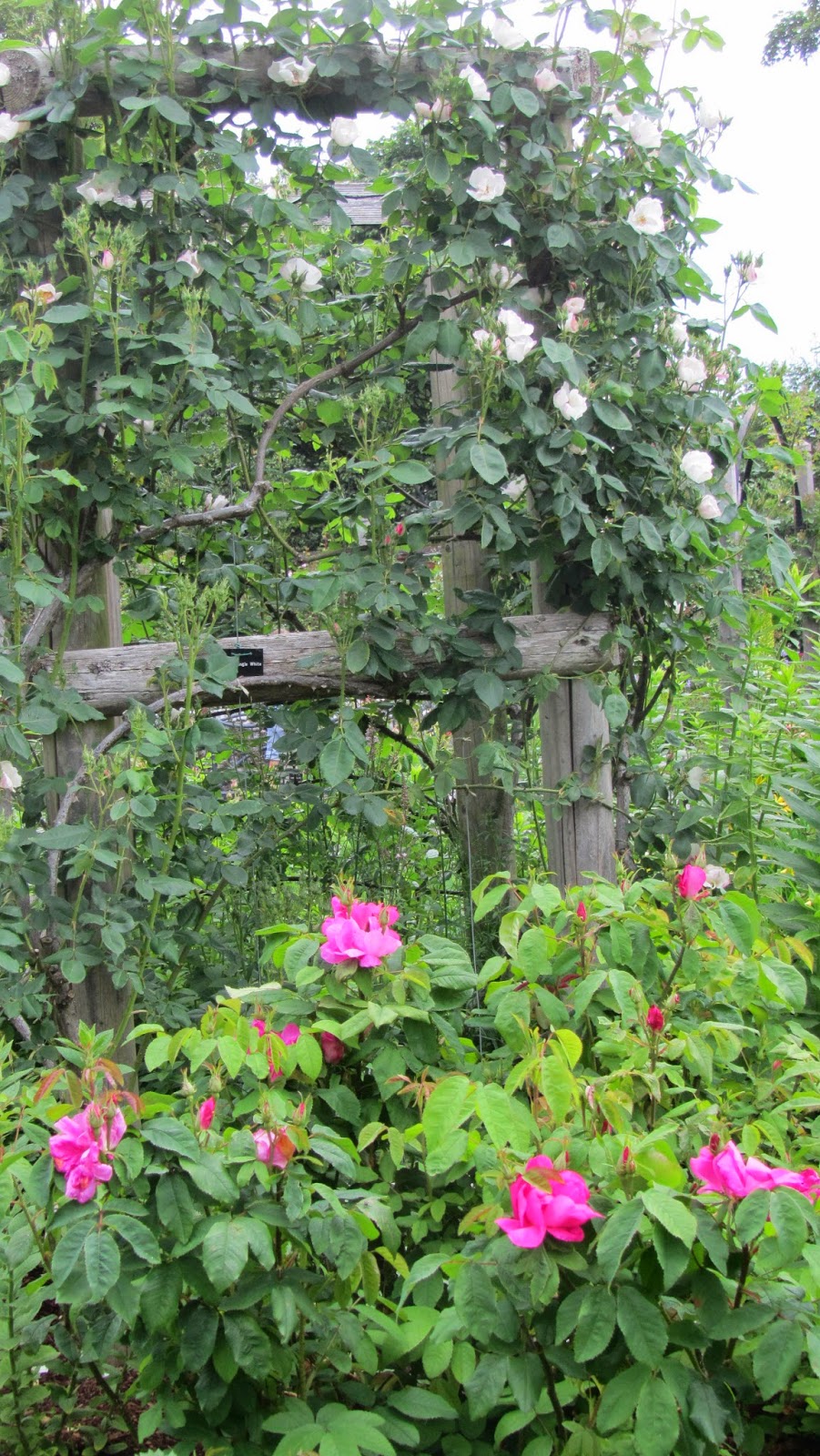 In the 19th Century these areas surrounded by high brick walls had been the kitchen garden for the great house. The mature trees of the surrounding parkland combine with the weathered walls to make a perfect backdrop for the collection of ancient roses.

Today was overcast but warm, so the scents were wonderful. Besides roses there are Irises, Clematis, Paeonies and all manner of Pinks. After the winter floods the Trust has been undertaking major drainage work. The Font which gave the House (originally a monastic foundation) its name is a spring which provides one of many tributaries to the river Test - one of the great trout rivers of our county of Hampshire. There was serious flooding just downstream from here last winter, not least in Romsey. At last most of the work seems to be complete, which makes the approach to the garden much easier, especially for those with mobility problems.


We shall be back here several times through June, I expect. If you are able to get this way in the next few weeks, do make the effort. It is a great place for refreshing the spirit - the very thing to make Whitsun even better.

This was our last opportunity to worship with our host parish, Our Lady Queen of Peace, before we relocate (on Whitsunday, aka Pentecost June 8th) to St Thomas More, Iford. We couldn't have had a better farewell. Fr Brian and I concelebrated with Fr Gerry, the parish priest, and Fr Ben who is soon to move to a parish of his own. Both these priests are missionaries from Nigeria, working to evangelise our post-Christain country.

This was the seventy-fifth anniversary of the consecration of the church, and a very jolly occasion it was. The church was packed, with dozens of children participating happily in the liturgy with rattles and tambourines and all manner of instruments for shaking and banging. Besides them there was a keyboard and a saxophone and (of course) a guitar. None of this redolent of Anglican Patrimony (at least, not the sort that we knew) but very whole-hearted and enthusiastic.

What's more the sun shone for us (a rare event in these parts lately) and the party in the churchyard was great fun.

Now we look forward to the move down the hill to St Thomas More, where we understand they also throw great parties - doubtless with a Texan twist in view of their Parish Priest, Fr Darryl Jordan. But the shape of the two churches could hardly be more different. Our Lady Queen of Peace is tall and thin (a High Church, you might say) whereas St Thomas More is wide and light (a Broad Church maybe?) - but this is not about churchmanship, only architecture. The contrast, though, is very marked, and we shall take a little time to adapt before we can feel at home in our new surroundings.

Shades of 'My Fair Lady'- but on Tuesday we met my cousin and a friend in Covent Garden and so were faced with 'the finest barn in England' as Inigo Jones called his church of St Paul. It was built as part of the Duke of Bedford's development of the area, and is one of the most influential of Jones' Palladian works. After lunch we left this model of Stuart patronage and visited Buckingham Palace, to see the exhibition of the Georgians. There was a substantial amount of bling:

There was also, naturally, a great deal of Hanoverian Propaganda. George I was not the obvious successor to Queen Anne. Indeed there were dozens of claimants before him; but he was a Protestant. For all that, just occasionally the Stuarts made an appearance. Here was the putative James III (and eighth of Scotland) so described by himself  in this engraving in the royal collection..

Next to him in the exhibition was George I, and on the label at his side the label states "the King is represented as 'defender of the faith' ready to champion the Protestant cause". What an irony, given that the title he is claiming was awarded to Henry VIII by the Pope for his defence of Catholic doctrine in his treatise on the seven sacraments. Still today it is claimed by our Monarch as though the faith referred to was the Protestant faith, held (albeit somewhat loosely) by the Church of England. What a charade. Henry had only sought the title so that he could hold his head up against the 'Most Catholic' King of Spain.'

Apart from the politics, though, there were some lovely things on show; none better than this portrait of David Garrick and his wife, by our first great native-born portraitist, Hogarth. 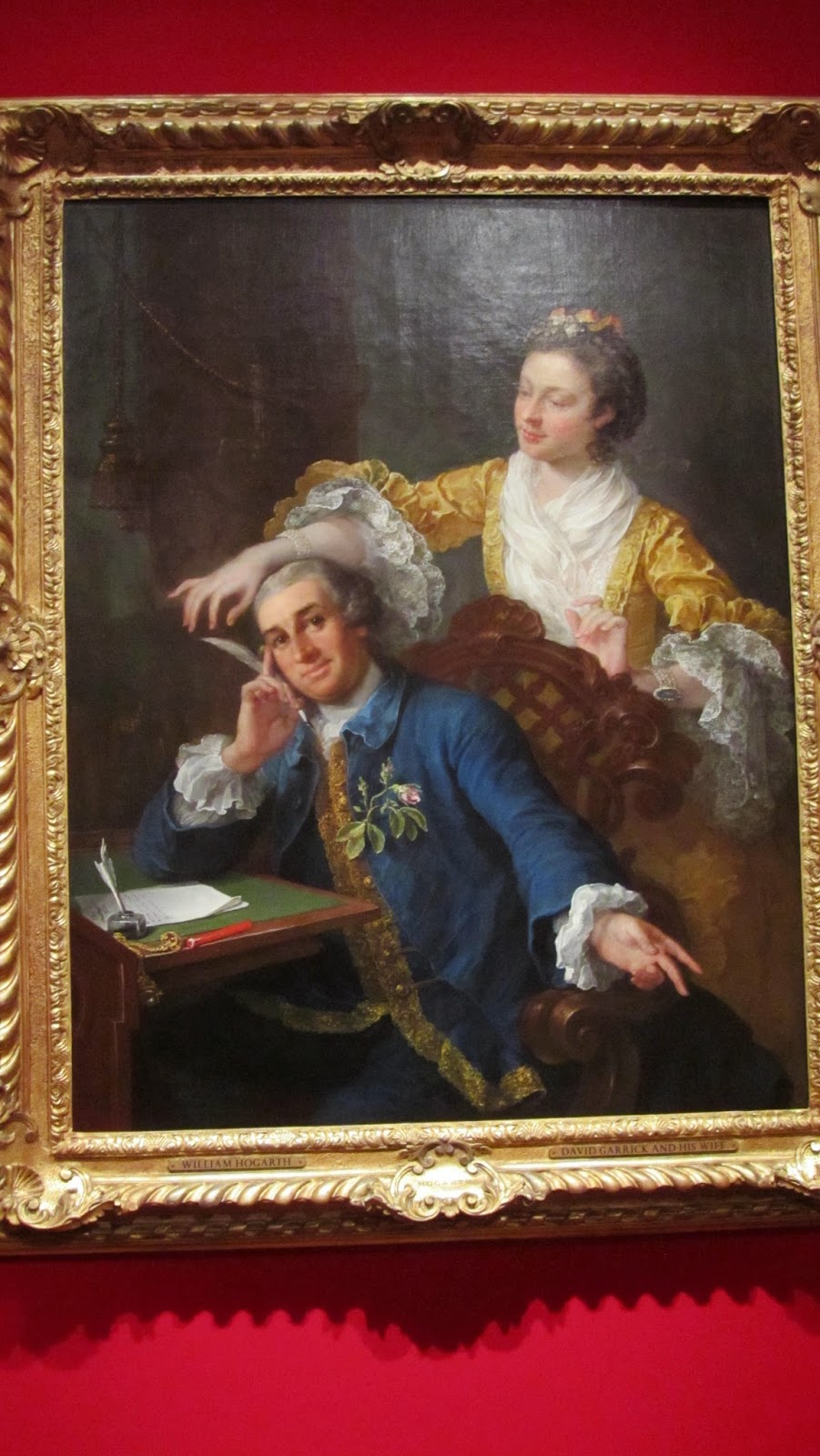 And so to bed. Goodnight.

What would we do without the Ordinariate?

Somehow everyone seems to be on holiday at once. Fr Marcin from New Milton is on his post-Easter break in Poland (where he is making arrangements for a pilgrimage later in the year) and Fr David from here in Lymington is not back from his break until Monday. So we have been holding the fort - 'we' in this case being a couple of retired priests and me. There have been sick visits and confessions to hear; but between the Mass this morning in Our Lady of Mercy, Lymington and the Vigil Mass this evening  in Our Lady of Lourdes, New Milton Jane and I have managed a picnic and a couple of hours in the Rothschild gardens at Exbury.

On Tuesday - Tuesday is at present notionally 'day off'- we go to London, to meet up with friends and visit the Gallery at Buckingham Palace. But first there is tomorrow,with another early start for Sunday's Ordinariate Mass in Southbourne. If the weather holds Monday could provide my second sea swim of the season- though to be honest I only stayed in for a minute or so yesterday. May in the Channel is not like August in Malta. 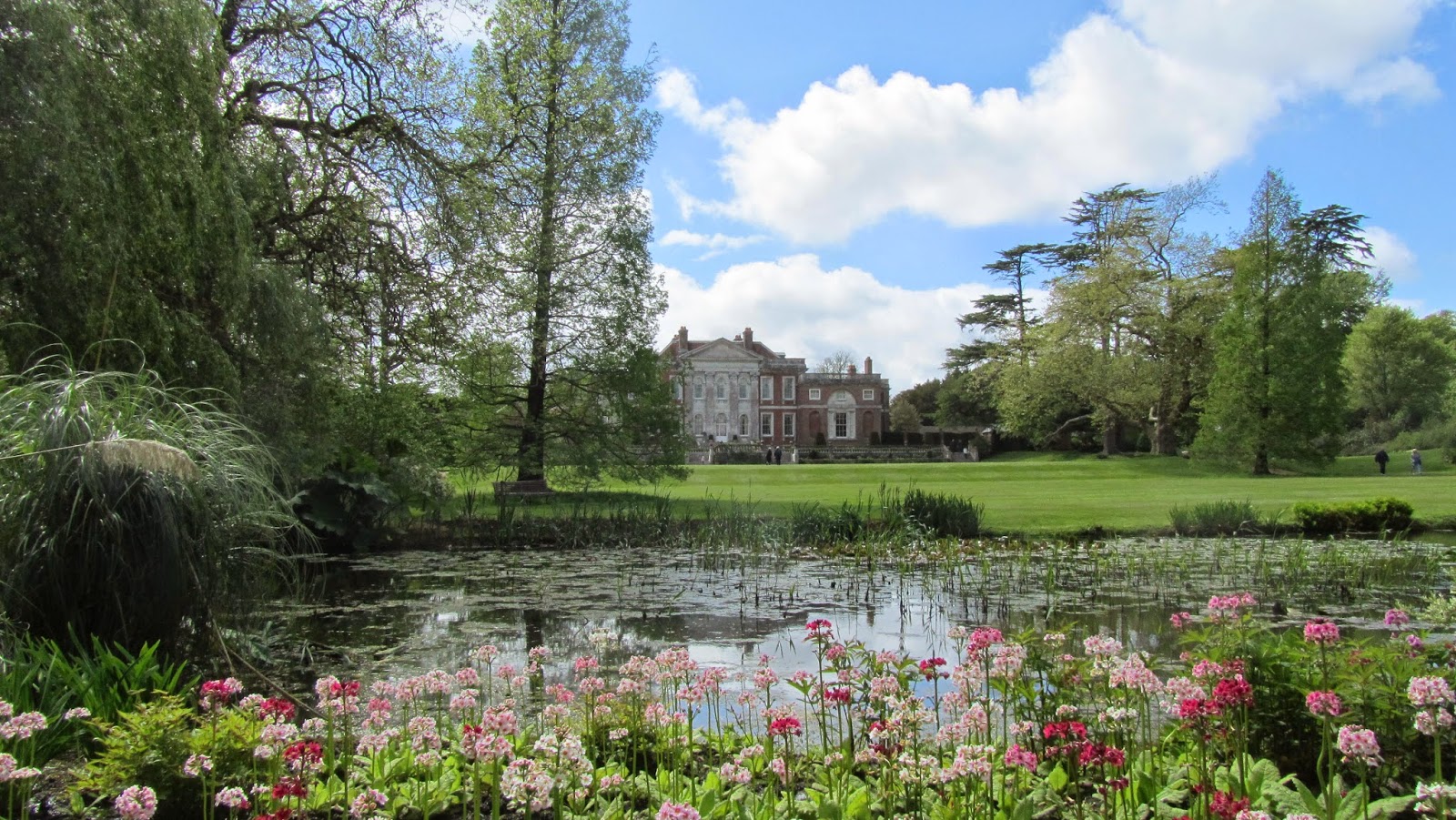 You MUST see the gardens at Hinton Admiral, said Trevor our head server -  and naturally we obeyed. Last Saturday was a perfect early summer's day, with a brisk breeze sending the clouds racing along. There really are several gardens on different sides of the house - and the Meyricks, descendants of the same family which lived there in the 1720's, are still there. Something admirable about such continuity. 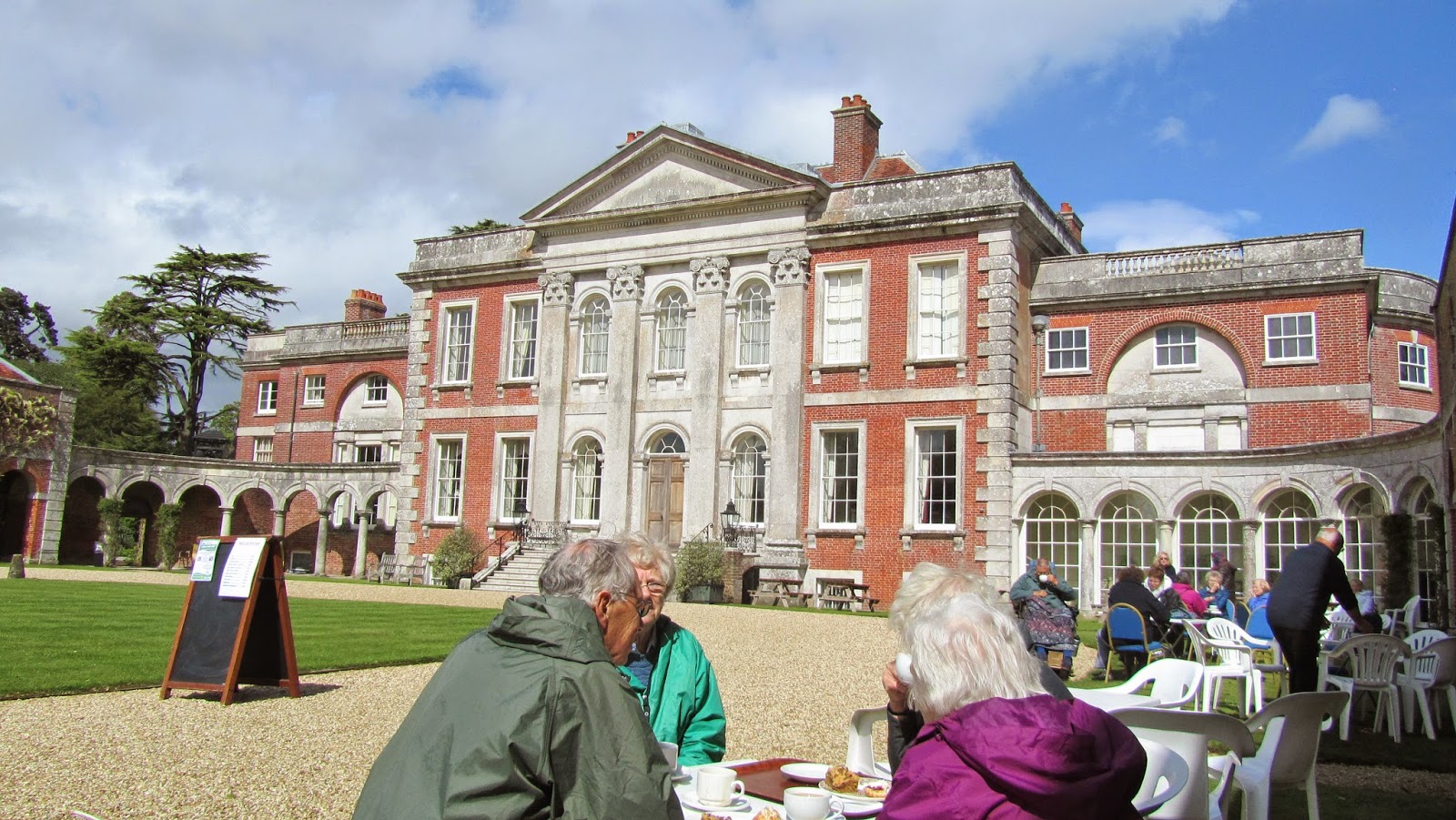 The front aspect of the house is rather more formal than the back, with colonnades to either side. There ladies of the parish were serving tea. The church was built by an ancestor of the present owner, and these open days help to keep it in repair. In fact, all the money raised from opening the gardens is given to charity. Next Sunday it will once more be open in the afternoon only, this time under the auspices of the National Garden Scheme.

It has been a pretty full weekend. Rhian, son of an Ordinariate couple - dad was an Anglican Cleric, who was an assistant in Christchurch Anglican Church (known as the Priory). He is one of three such clergy who are all members of the Ordinariate. Rhian behaved immaculately, walking in procession with the servers and me at the start of the Mass. Afterwards there was a very jolly reception in the Hall, with a skittle alley set up for the occasion. I'd been told there was to be a bouncy castle, but I think the high winds ruled that out - pity, I was looking forward to it. Then a little later Mgr Keith, our Ordinary, joined us. He had been preaching at Mass in Iford and speaking to the people there afterwards, assuring them that none of us had two heads. They are getting ready for us to move to their church on Whit Sunday - good that we can keep the familiar Anglican name for this Feast. 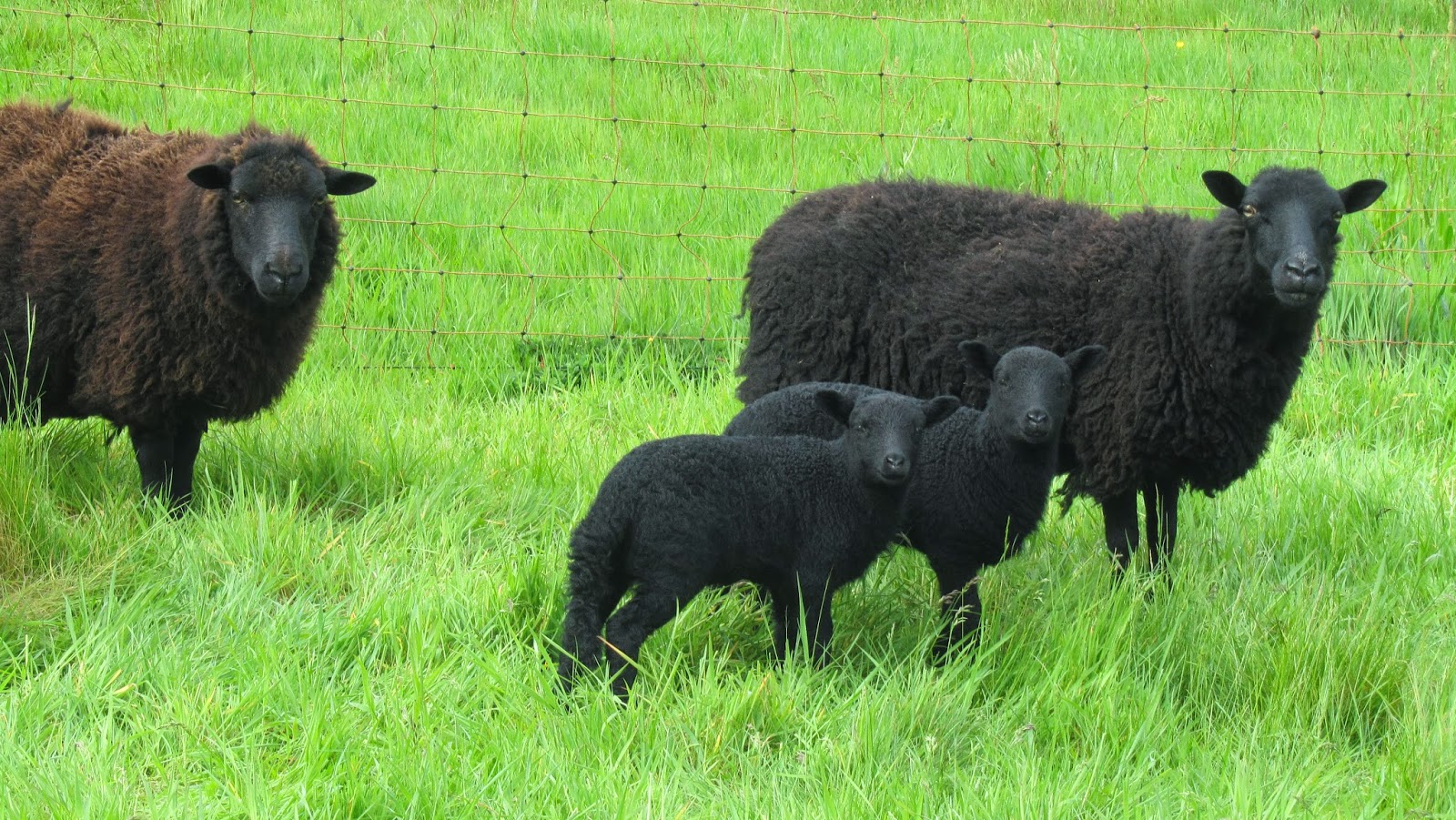 Before we left Hinton Admiral we paid our respects to these residents. It seemed particularly appropriate when all the readings at Mass were sheep-related. I have a very soft spot for black sheep  They have given their name to all sorts of scoundrels, but they are so much more interesting than their run-of-the mill white cousins. Maybe they are symbolic of the Ordinariate; part of the one fold under the one shepherd, but still a bit distinctive? And the Black Sheep Brewery in Masham produces much more characterful tipples than Bishop's Finger.
Posted by Edwin at 13:34 No comments: