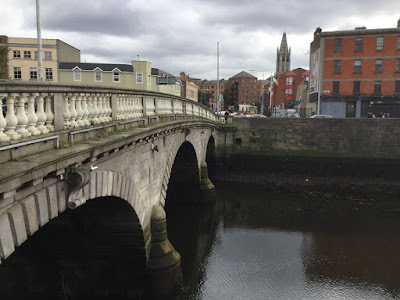 A first visit to Dublin has set me wondering. Bridges - Pope Benedict as Pontiff - Pontifex Maximus - the Bridge-builder - and the Ordinariate as a Bridge. In Dublin, where the population is predominantly Roman Catholic, there is a Catholic pro-Cathedral (below). It is a fine neo-Classical building. But why only a Pro-Cathedral?

One explanation I heard was that when the Irish Free State was set up a century ago it was supposed that the Church of Ireland, the Anglicans that is, would happily hand over one of the two ancient Cathedrals which had been in their possession since the Reformation. They could hardly need two such buildings within half a mile of each other.

Today a century after the 1916 Rising Christ Church and St Patrick's are both in the hands of the Church of Ireland. The former seems to do a great tourist trade, though it is largely a Victorian rebuild.  St Patrick's, too, had a make-over thanks to a Guinness (picture left). There seems to be a very generous spirit among the Irish. In the Castle State Apartments, which are used for grand events (such as the visit of the Queen to Ireland) the reception Hall still has on its walls portraits of Victoria and Albert, and of most of the Viceroys. The Chapel within the Castle also has the names of former Viceroys (together with St Patrick) carved along its balconies (below). Yet none of this has been vandalised. Other places which were once under Colonial rule have generally been less merciful towards their former overlords. 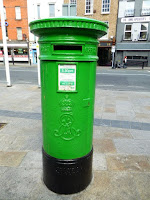 Best of all, outside the City Hall stands a postbox proudly bearing the cipher of Edward VII. Is it possible that in England we could improve relations between the Roman Catholic and Anglican Churches? Not with another endless round of ARCIC conversations but with a more generous attitude to sharing. Perhaps the best thing I did in fifty years of ministry as an Anglican priest (perhaps the only really good thing) was to start the experiment of the shared use of St John's (Anglican) parish Church. That was forty years ago, and both Bishops were determined it would just be an experiment. The experiment seems to be working, and still between the early Communion service and the later Parish Eucharist there is a Roman Catholic Mass in St John's. I know there are other instances of such sharing - but it ought to be commonplace. In many Anglican parishes a small congregation struggles to find the money to keep the building standing; yet often (and this is mostly true in our larger Cities) a neighbouring Catholic Church is bursting at the seams and has to have a succession of Masses throughout the day to accommodate everyone.

There are so many other things we could and should share. Within the Ordinariate I think particularly of our friendships. Can we not engineer meetings when Roman Catholics and Anglo-Catholics might meet socially and talk freely about our concerns, instead of sniping and point-scoring at a distance? I think I am still a life member of Forward in Faith - yet I do not even receive New Directions any longer, nor am I invited to the annual Assembly or any of its meetings. What are we afraid of? So many Anglican clergy have remained in the Church of England for good and honourable reasons, and we Roman Catholics should honour this instead of implying that they are just cowardly. It is good that Fr Paul Benfield writes about Anglican matters in our Ordinariate magazine. Perhaps there could be a reciprocal arrangement for New Directions? [And since writing this I find that such an arrangement already exists; Simon Cotton has a column. Sorry I did not know this before I wrote - just hope we can increase and build on all the contacts we have]

When Newman left the Church of England, he described it as The Parting of Friends; yet I have a copy of Pusey's University sermons, a copy he had given to his daughter Mary. In it he has written a footnote in his own spidery hand telling of a very kind correspondence between him and Newman forty years after Newman had left the University Church in Oxford. (His memorial, rt. in the Dublin Catholic University Church). We really should be keeping all our friendships in better order, if we are to make the Ordinariate a bridge rather than an obstacle between our two communions.