LONDON. Are you surprised?

News of the appointment of  the next Bishop of London, Sarah Mullaly, has come as an early Christmas present for some in that diocese. For others it appears to have come as a shock and a distincly unwelcome gift. No doubt, though, they will find a way of living with the latest new reality, some by emulating the Bishop of Horsham and discovering they were wrong all along, others by drawing yet another line in the sand as they retreat up the beach, back towards an unyielding cliff face.

When the Ordinariate of Our Lady of Walsingham was established, many of us who took the opportunity given us by the Holy Father were surprised. Friends who had previously declared themselves staunch Anglo-papalists discovered reasons why it was impossible for them to make the leap just now. In a year or two, when conditions in the Cof E became unbearable, they would jump, but not just yet. There was the children's education to consider, or the wife's work, or the need to build up a larger pension. Few admitted that their incumbency was too comfortable just now, or that they might have to amend their lifestyle.

As an Anglo-Catholic I had taught and believed that the Church of England was what it claimed to be, 'part of the one, holy, catholic and apostolic church' and that our task was to persuade the rest of the C of E that this was the case. Even when the ordination of women to the priesthood happened, we convinced ourselves (because we were told it constantly) that this was an experiment which could be reversed in future.

Since then the Church of England has been challenged with many other developments in society, easy divorce, abortion on demand, the Royal Family not just tolerating but celebrating adulterous relationships. and now the ability for anyone to change gender at will. Soon more in the Church of England will be celebrating same-sex 'marriages'. Yet it seems nothing will convince those who still call themselves Anglo-Catholics that the game is up, that there is no catholic future within the established church. What once seemed a local expression of the Universal Church now is quite clearly an utterly erastian, protestant body, sometimes dragging its feet but in the end determinedly copying society in the vain hope of appealing to the masses. A 'catholic' sect, a society for those who like that sort of thing, might be permitted for another year or two, before it is crushed under the weight of the zeitgeist and political correctness. The treatment of Philip North over Sheffield was not a one-off aberration; it is destined to become the norm, despite Philip Mawer.

There is no joy in writing this. I recall a church which could once claim to be stupor mundi, a scholarly compassionate body which was founded on the Apostles and the ancient Fathers and was prepared to speak the truth to power.  Ichabod, the glory has departed. So why will anyone with integrity still try to prop up this decaying corpse? 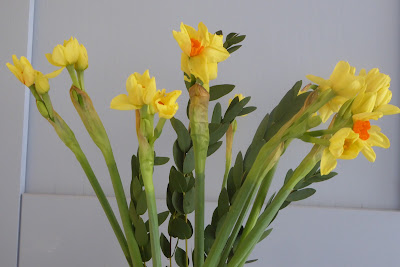 Thank the Good Lord for the new springtime of the Church, for Pope Benedict and his foresight in enabling the Ordinariates to happen, and for the Catholic Church which has welcomed home so many of us who were feeling bereft. There is still time for the rest of you; don't leave it too late. The message of Advent has never been more appropriate ... "while it is still today".