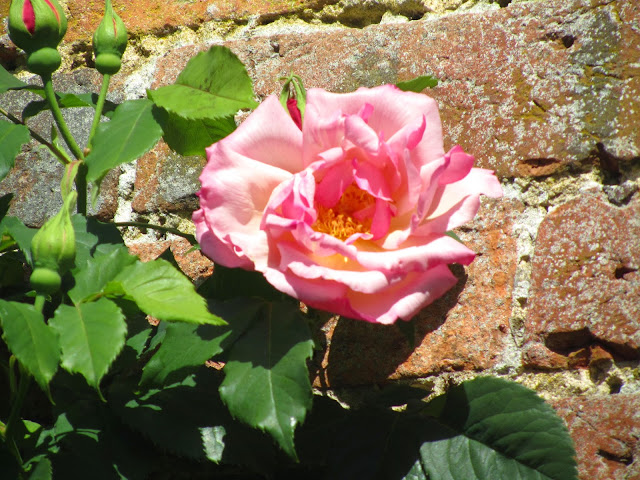 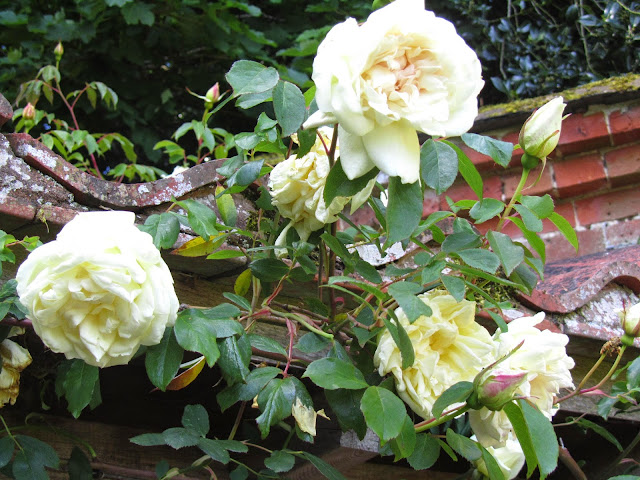 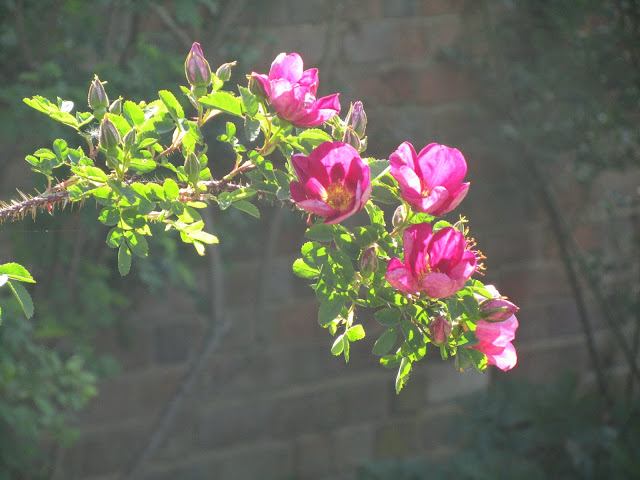 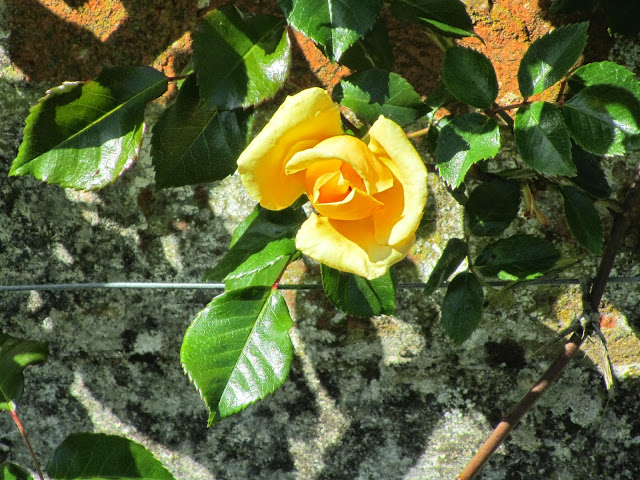 Hemel Hempstead was once a small market town set in rural Hertfordshire. Then the planners came along, London spilled over, and the result is the New Town. The Catholic Church has a considerable presence despite a shortage of priests, and the Ordinariate shares the Parish Church of St Mark, a Church within a Catholic secondary school. The Group has had a tough time, since for the past two years it has been without its own pastor. They have even bought a house for their priest - yet still they wait an appointment. There has been a succession of priests helping out. Today, and on one or two Sundays each month, Fr Anthony Homer commutes in from central London to celebrate their 8.45am Mass.


It was a great pleasure for me to be able to concelebrate with Fr Anthony, and then with my wife to meet members of the Group  - many of them old friends from our time in St Albans, when we often went over to St Francis', Hammerfield, the former Anglican home of many in the Group. As in Bournemouth, refreshments after Mass provide part of the clue to how such a Group holds together. They know one another very well, and are supportive of everyone.


Brian Cox is Chair of the Group's Council, and despite a cataract operation earlier in the week was present to introduce the Novena which our Ordinary is asking us all to support.  Mgr Keith visited Hammerfield a week ago; but had no further news about a permanent Ordinariate priest for them. There are former Anglican priests on the way to Ordination within the Catholic Church; but there seems to be some resistance to ordaining individual priests for the Ordinariate - instead they are expected to go down the 'ordinary' (that is to say Diocesan) route.


Unless there is a relaxation in this insistence, the Ordinariate is doomed to die out within a generation and Pope Benedict's vision will have been frustrated.. Surely the Ordinariate  must be able to produce and ordain its own men? The argument appears to be that Anglicanorum Coetibus was designed for Groups of Anglicans. So it was. But individuals can join, and that needs to include Anglican clergy who may, or may not, be accompanied by other lay people. There are Groups without priests. There are Anglican clergy seeking a ministry within the Catholic Church. Where is the problem?

There are many advantages in being retired; one is being available in an emergency. Just such an emergency happened at the end of last week. Fr Roger, Port Chaplain in Southampton, rang asking if I could be free for the next four days. A Crew member had died suddenly on a P&O ship, and they wanted a priest on board at once. So the next morning, with two of the support team from Carnival (the parent company of P&O and Cunard) I flew to Seville.

You don't expect to come across a large ship parked in the middle of an inland City; but the Guadalquivir is a very substantial river, and Adonia, the smallest of the P&O vessels can get right in.

Once on board, our task was first to meet as many of Kevin's colleagues as possible. He had been Officer with special responsibility for the ship's technical stores. He was equally liked and respected by every part of the ship's company. We were able to celebrate a Requiem Mass for him on Saturday evening - our first day at sea after Seville, and so a time when many of the Crew were available (at 11.30pm).  It was a very special Mass. The musicians on board wanted to play a tribute, so we began with a  Jazz number, which originated as a funeral march in New Orleans. They ended with "When the Saints go Marching in" - but because Kevin was no Southampton supporter many found that a bit ironic!


Edridge, Maitre d' from the main restaurant, read the first lesson. A Goan like many of the Crew he had been a frequent jogging companion of Kevin's. The Captain read the second lesson and Phil Gowland, another Officer, spoke movingly about their friendship and read some words from Kevin's wife Maureen (Mo) who had also been working on board when Kevin died.

Next morning the Captain invited me to assist him in leading the ecumenical service for the passengers, saying some of the prayers and giving the Blessing. The same evening I celebrated Sunday Mass for the Crew.

Seville was an unexpected pleasure; I had a little time free on the second afternoon in port and got as far as the Cathedral.  What an amazing complex of buildings that is!  Not perhaps the sort of Church you would want to attend every Sunday, but for a special occasion, Wow!

On the site of a Mosque from the time of the Moorish invasions, the interior of the Cathedral is witness to the richness of South America - a silver Altar, and a reredos entirely covered in gold leaf. No wonder Drake wanted to intercept the Spanish Treasure Fleets.

Equally well-loved though, and prayed in, is the little chapel created by the crew from a small space in their Mess. The crew members are mostly from Goa or the Philippines, and the devotion of these hard-working men and women puts us to shame. The ministry of the Apostleship of the Sea (Stella Maris) is greatly appreciated. Having served as Chaplain on Adonia at Easter I was welcomed back like a long-lost brother on my return. The few devotional cards I had been able to take with me at such short notice were seized eagerly; and I said a little to some of them about Our Lady of Walsingham, and her patronage of us members of the Ordinariate. [You may spot OLW on the right of the picture].

The next port of call was Tangiers. I did not have time (or inclination) to do any sightseeing - but it was interesting to catch a glimpse of Gibraltar; I had last seen the Rock when I went to Malta and back as a young child. On that occasion my mother had saved up twenty pounds to pay the fare - no 'accompanied postings' then, unless you paid for it. She had earned this princely sum by scrubbing floors.My father was a submariner at that time.  I think I was two years old when we came back to England a couple of years before the war..
After the brief stay in Tangiers we sailed up the coast of Portugal before reaching on Monday the port of Vilagarcia de Arousa in Galicia, in the North-west corner of Spain. We were very near Santiago but there was no time for even the briefest of pilgrimages. Instead we went by Taxi to the airport at Vigo - and there our trials began!  There was fog, we were endlessly delayed and eventually caught a plane to Madrid after spending some seven hours in the terminal, not knowing whether we would ever get away. There were no announcements in anything but Spanish, and very few of these. Only one of the two employees on the Iberia "Help" desk had any English at all.
Would we ever get away from Vigo? We did, but only in time to miss the connecting flight from Madrid to UK,  so we were put up in a hotel. The flight home they found for me meant a 5.50a.m. departure from the hotel. I am not very good on four hours sleep.

So if you DO go to Spain by air at any time, try to avoid Vigo airport -  and the ministrations of Iberia airlines.

From Heathrow
it was bus to Woking, train to Brockenhurst and taxi home - and eventually bed for a little recovery time. But I would not have missed it all. A great experience, and I was glad to be invited to undertake this by the Apostleship of the Sea. It is a Catholic Charity well worthy of your support, So many seafarers are away from home and family, church and sacraments, for such long periods. The care given by Port Chaplains around the world, and by Chaplains (when they are permitted to function on board ship) are greatly valued.