More at sea than ever

Disaster; I did not make the flight (see previous entry). Are they going to let me join them on Saturday in Southampton?
Posted by Edwin at 11:51 No comments: 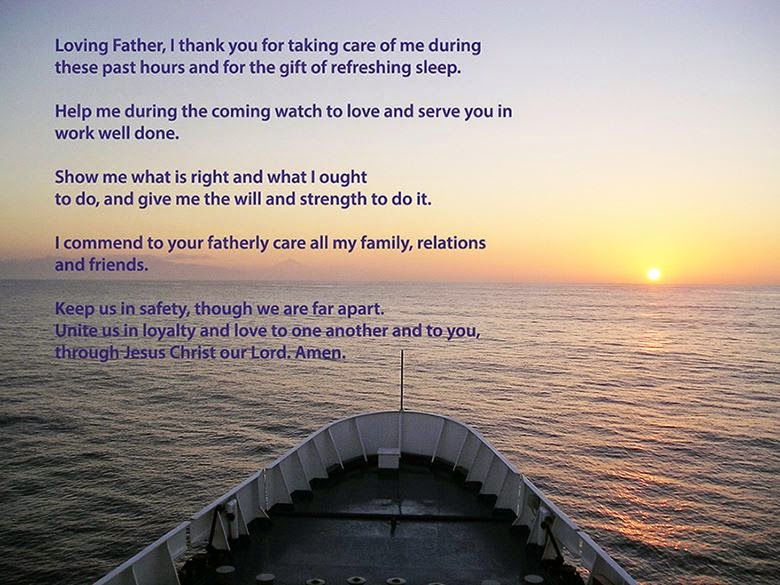 This image is from the Apostleship of the Sea's facebook page. Over Holy Week and Easter a number of priests from England, some of us of the Ordinariate, will be on cruise ships bringing the Sacraments to all those on board - but especially to those who work on the vessels, and spend so much of the year away from family, friends and Church.

In case you think this is a very happy and self-indulgent way to spend the next fortnight, maybe you'd like to consider my own itinerary. After the Ordinariate Chrism in London on Monday, an evening trip to Victoria to get to Gatwick. The flight departs late evening, and I should be in Oporto around 00.30hrs. Five and a half hours later we take off again, to Lisbon; a rather quick change of planes for the last leg to Horta where I am due around 8am - to meet P&O Cruise Ship Adonia later that day. We are due back in Southampton on Saturday. There I hope Jane joins me (lugging the various booklets, rosaries &c which the Apostleship have asked me to distribute). We sail to Porto Santo (Madeira) over the first few days of Easter and disembark there for a two day stop-over before flying to Heathrow.

Most days there will be a Mass or Liturgy of the day around 11pm for the Crew members, and a morning celebration for the passengers. So it will be different from the usual Parish Triduum and Easter. Please pray for those far from the Sacraments at this time, and especially those separated from their families.

I hope you might like to see a few pictures on my return.
Posted by Edwin at 08:29 No comments:

Nicodemus, a Ruler of the Jews

St Anne's is one of the prettiest Catholic churches in our neighbourhood. Last evening I celebrated their Mass. They have a liturgy of the word and distribution of Holy Communion (what is curiously called a "eucharistic service") on Wednesday, a Mass on Sunday evening  - and that is all. If there were more priests available, it would be a thriving church.Many would love to have a daily Mass. There is a lively community in Brockenhurst, and there is great lay enthusiasm at St Anne's. What is more they SING; not just hymns, but also the responses to the Sursum, the Sanctus, the Acclamation. Anglo-Catholics would feel very much at home there.

Many Anglican clergy friends of mine are waiting on the brink of joining the Ordinariate; they just want to get this particular job done, complete this child's education, wait to see just what it will be like when there is a lady Bishop in the diocese, get another year or two onto their Pension provision.

I just fear they might leave it too long. There are so many disillusioned lay people in the Church of England, hoping that some Anglican priest might give them a lead. There are so many Catholic laity, waiting in the hope that their church will not be closed for he shortage of priests. There are Catholic Bishops and our Ordinary involved in a juggling match, trying to ensure the best use of a reducing number of clergy. And still Anglican clerics, entirely catholic at heart, hang on for another year or two, 'until'. If only we could somehow let them see what a joy it is to be in Communion with the See of Peter. The welcome that awaits them is wonderful. Well the Lord is very patient - yesterday's Mass readings were about Nicodemus. Poor timid Nicodemus, who could only approach Jesus by night (for he was a Leader of the Pharisees - what would people think?). Later, he dared speak up a little ("You can't condemn a man without giving him a hearing" he said - and he was berated for his speaking out. Eventually, he came into the light; and outdid the Apostles by joining with Joseph of Arimathea in taking care of the Body of Jesus and giving it decent burial, without bothering what his old friends might say. I hope there are many who, from timid beginnings, are getting ready to declare themselves and join the Roman Catholic Church - whether through the Ordinariate, or by the circuitous route of offering for the diocesan priesthood. Whichever you decide, once the decision is made, you will not regret it.
Posted by Edwin at 09:39 No comments: 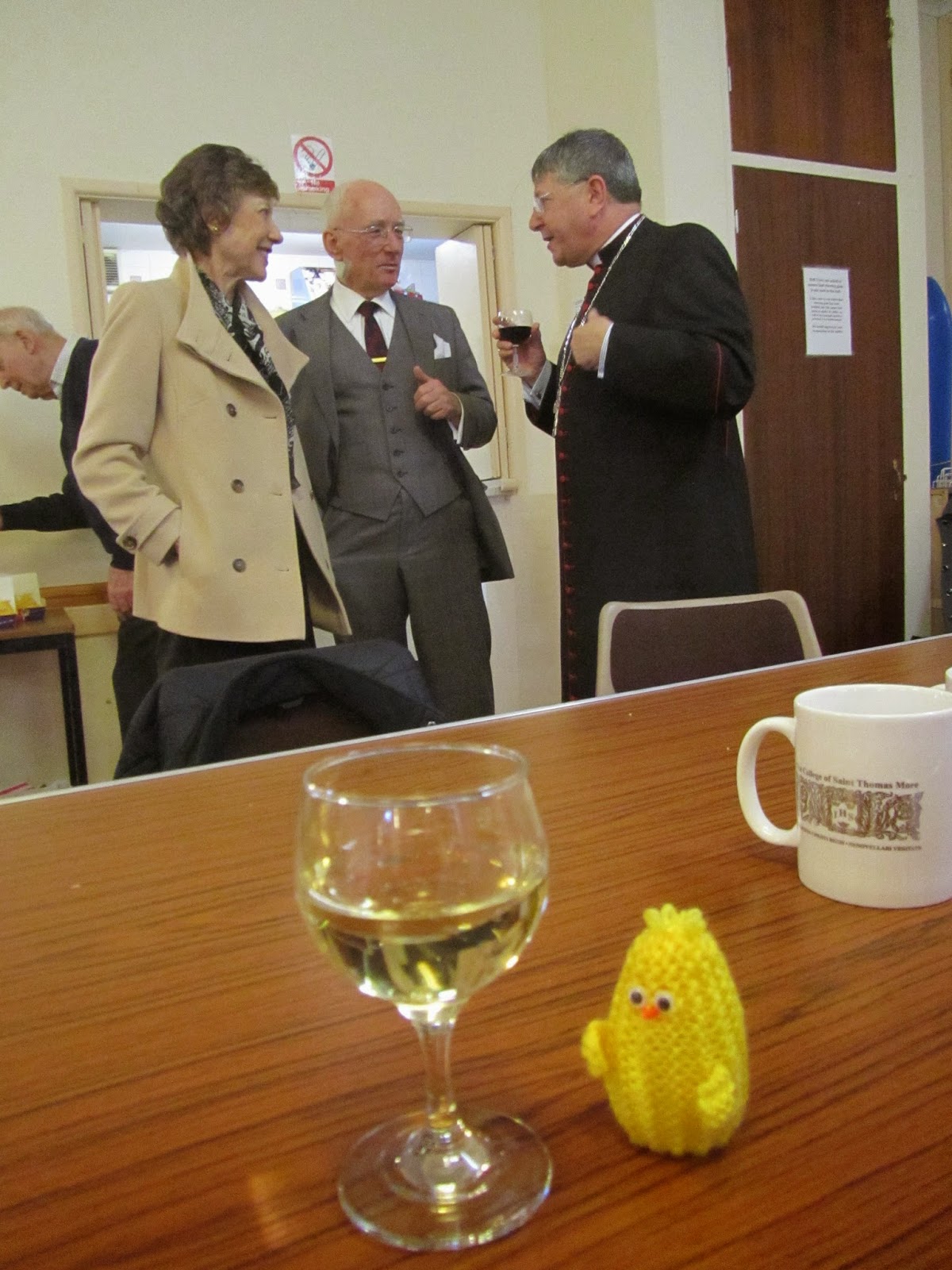 This weekend Mgr Keith Newton was with us to inaugurate Fr Darryl's ministry as Pastor to the Bournemouth Ordinariate Mission. He preached on the Epistle - 'not many wise, not many mighty' - then we all joined in a very happy lunch party.

Here he is seen talking with John and Jan Hares, who came to us from the Reading Group earlier this year.
You may notice an intruder in the front of the photo; he is the last of the Chicco BOMs, all the others having been bought. Tracey's inspired knitting of these egg-cosies will have added more than £50 to the Torbay Ordinariate Appeal. 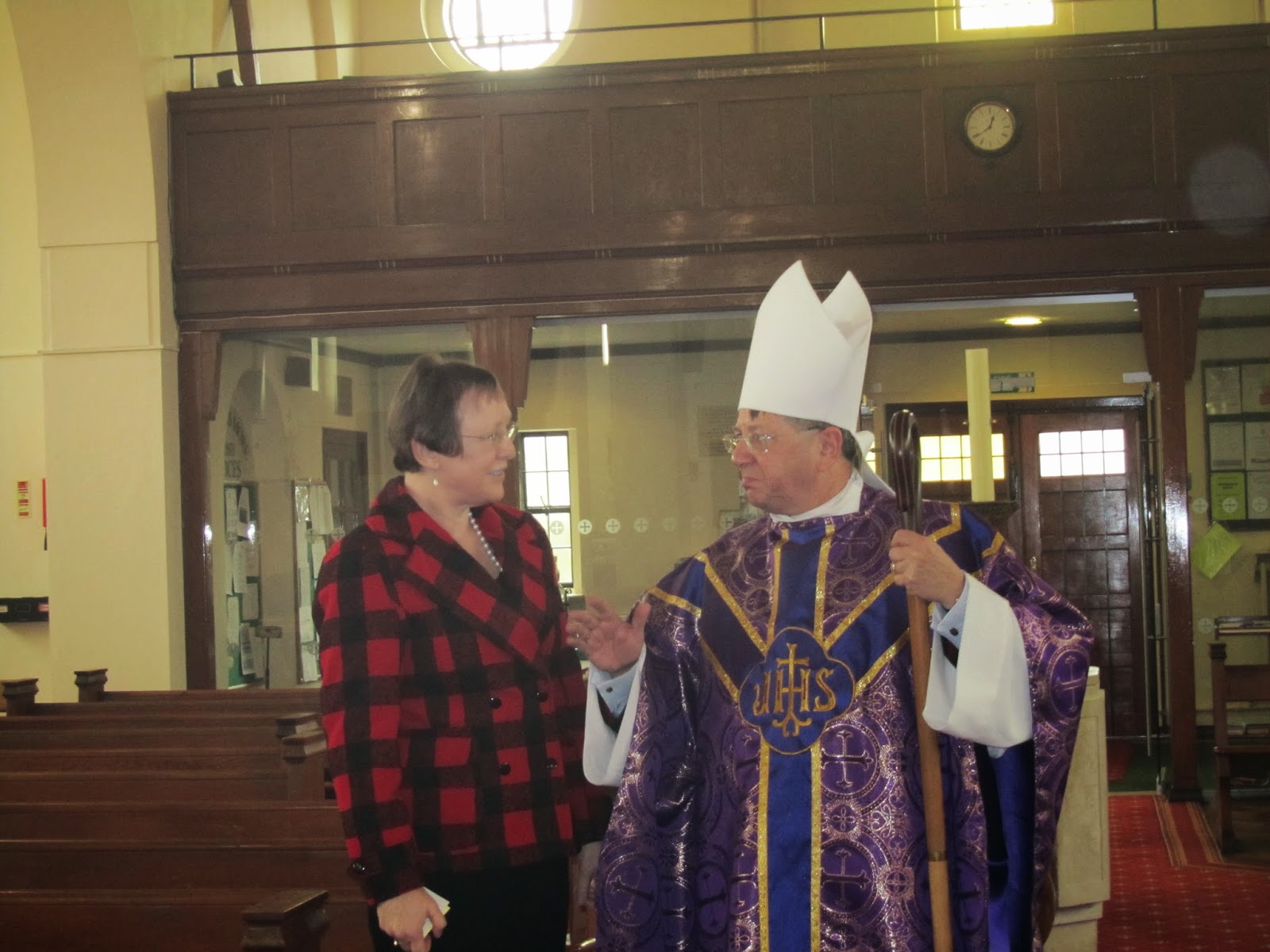 Here Mgr Keith is speaking with Mary Taylor after Mass. Among other things Mary is our safe-guarding officer - a task she also undertakes in her daily work which involves organising the fostering of children in the Bournemouth area. Mgr Keith is modelling the Lenten Vestments recently bought by the Mission, and known affectionately as the Cadbury's Dairy Milk set. 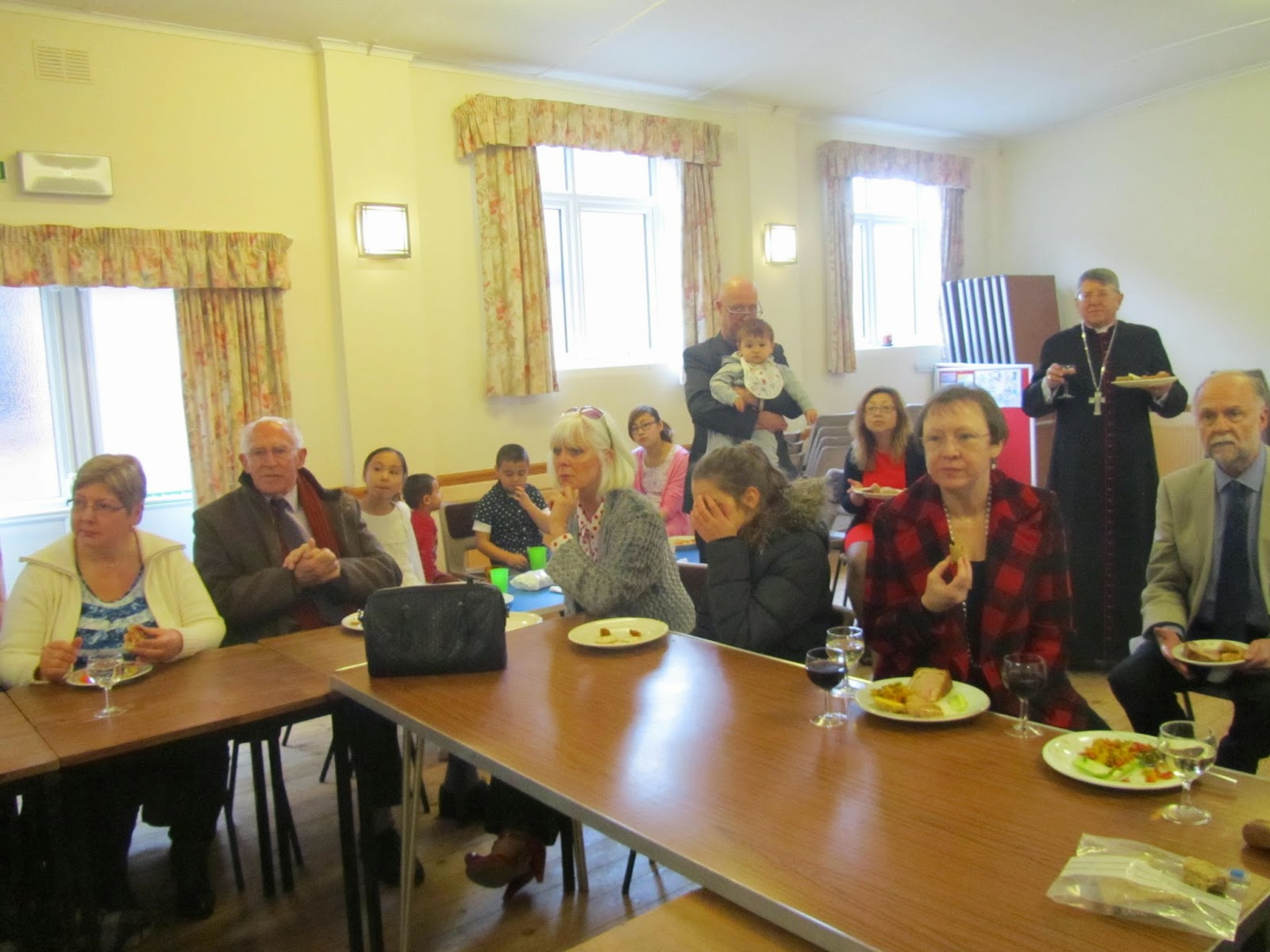 As always the bring-and-share lunch was a huge success. Almost everyone who was at Mass contributed to the party, so that there was enough food left over to fill the proverbial twelve baskets.

Mgr Keith insisted on having a photo with our youngest members (and our largest family group) children of Sherlyn and Dennis. 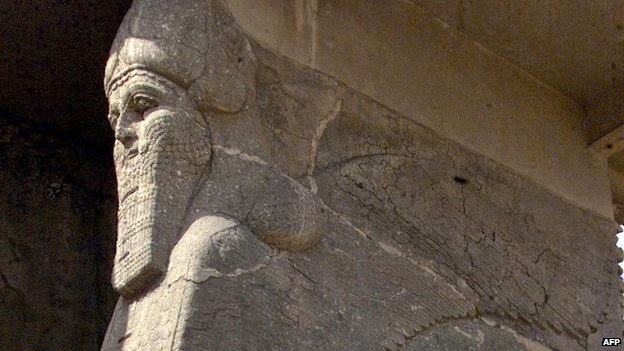 'The head of the UN's cultural agency has condemned the "systematic" destruction in Iraq as a "war crime".'[BBC report].

Yes, it is terribly sad that so much evidence for ancient civilisations is being destroyed, so much beautiful work being attacked as 'idolatrous'.

Yet only last evening in a programme about monasticism the destruction of much more art and architecture, in this country, was being excused as somehow necessary before our nation could become truly enlightened. And it was asserted that the murder of those monks who resisted, like the septuagenarian Abbot Whiting of Glastonbury - hanged, drawn and quartered on Glastonbury Tor - was a fairly minor matter. It was not - and neither is the slaughter going on even now by these self-styled defenders of Islam.

In one interview about the bulldozing of Nimrud a UN speaker described what has happened as "ethnic cleansing". There has certainly been ethnic cleansing by IS, and it continues. It is not a matter of archaeology, though.  Why such a muted response against the killing of entire communities, Christian, Yazidi and others, who were established in Syria long before the Islamic invasions? Culture matters, sure. But human beings are of infinitely more value than carved stone however beautiful. Those murders are the real war crimes.
Posted by Edwin at 14:40 4 comments:

If you were at Chelsea couple of years go you might recall and entry from Furzey Gardens. Some of the competitors spend hundreds of thousands of pounds producing a garden for the show. With the help of Chris Beardshaw, the Furzey Gardeners created a magical space for a tiny expense - and brought home a Gold Medal! They also brought their exhibit home, and here it is.

The gardens are in the New Forest, a dozen miles or so from our home; you might have to persuade some of the locals to let you in:


It is well worth the effort. The gardens are run by a charitable trust, and many of the people you see working there will be students with learning difficulties. Everyone there, students,  tutors and volunteers you will find are very welcoming. In past years we have had an annual ticket to another local garden. This year we decided it was a much better idea to enjoy the gardens at Furzey and at the same time support this hugely important venture with an annual membership. 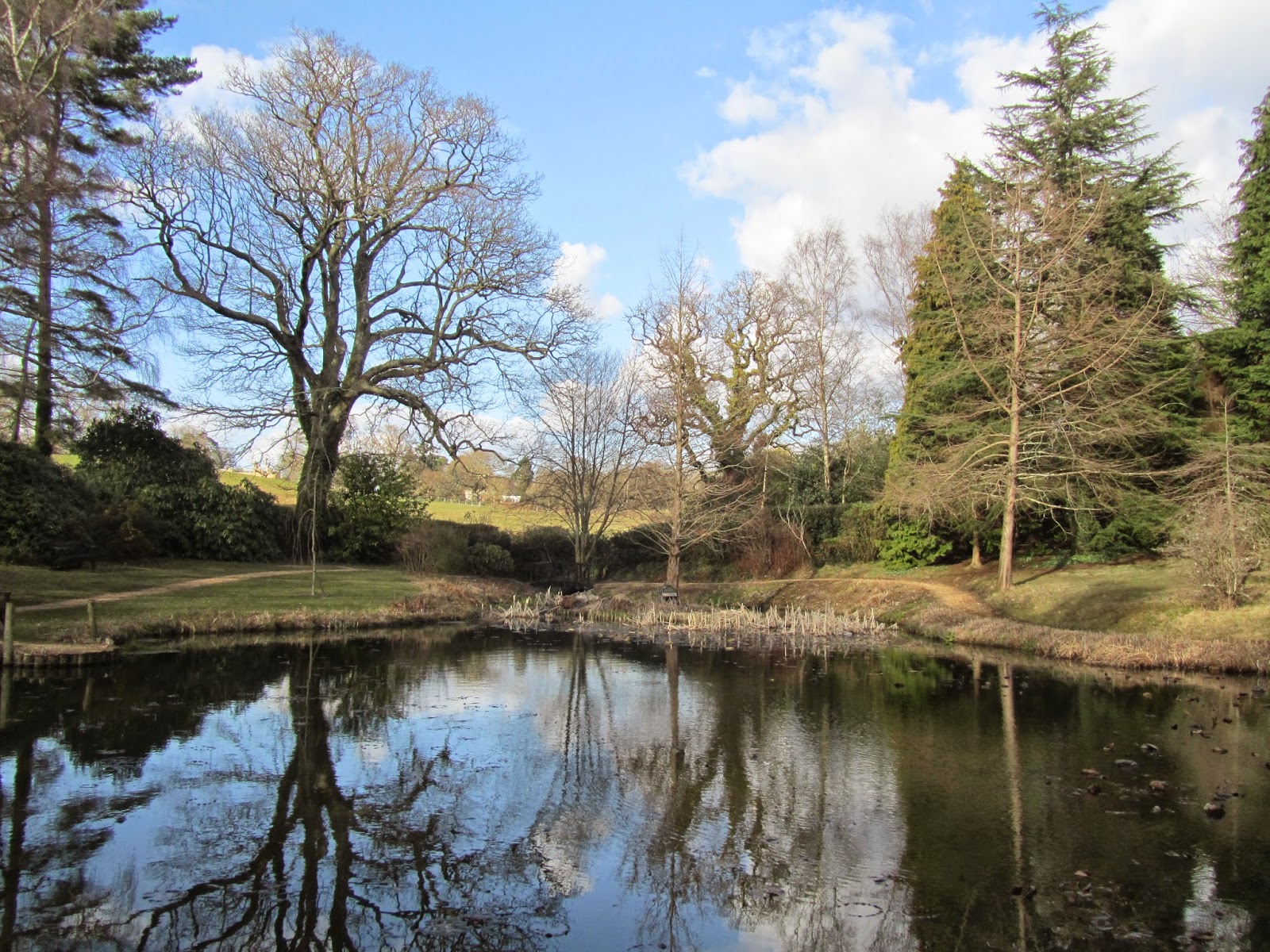 We have been several times in past years, and each time we visit there seems to be new initiative. At present many paths are being reinstated, some with board-walks and handrails.The work involved is immense, and everyone gets stuck in (quite literally stuck, sometimes!)
There used to be relations of Lamas [or Llamas] in a paddock (not sure if they are Guanacos?- anyway, some sort of S American Camelid). Now they are not isolated, and today they had company - sheep, donkeys, and a couple of chaps labouring over a bonfire.

Fear not, the marbles are still in place. Thought, though, that you should meet Chico Bom. He is the creation of  Tracey, one of our Bournemouth Ordinariate Mission. A couple of  weeks ago we handed out leaflets from the Torbay Group, appealing for help in purchasing a former Methodist Church for the Ordinariate. Now Tracey had originally come into the Church of England from Methodism, so she felt a special need to do something this Lent to raise some funds for that Appeal. So this morning after Mass we were introduced to Chico (I suspect like the Marx Brother of that name his REAL name is Leonard, but we can't be sure - he is not saying.) Tracey allowed me to bring Chico, her prototype Easter Egg Cosy, back home with me. As you see he helped write this blog. He has spent the rest of today getting acclimatised and meeting some of the flora and fauna of Lymington.

At first he found Wol our Lancastrian owl, a bit intimidating, but give them time and they
will surely get along. I have a feeling that Chco is going to appear from time to time on Facebook, but my valued readers on this blog deserve the first sight of him. Chiefly because we would like others to go and take up the challenge from Tracey. She is busy knitting her fingers to the bone in order to create many brothers and sisters for Chico. All the money she raises from their sale (the asking price is only £1.50, and his woolly exterior hides a genuine chocolate cream egg, so we look for generous donations) will go to the Torbay Ordinariate's appeal.. We hope other Groups might be inspired to do their own fund-raising best for the Torbay Group.

I you would like to find out more, log on to the Torbay Group's page, or write to their Pastor, Fr David Lashbrooke, St Agatha's Presbytery,27 Exeter Road,Dawlish, EX7 0BU