'That'll be a nice holiday for you, Father' said most people hearing I was to act as Chaplain for nine days aboard P&Os' 'Arcadia'. Well, yes - but it was rather more than that.

Every evening we were at sea the Crew (many from Goa, Kerala and other parts of India, many too from the Philippines) wanted to have Mass. Most evenings that took place in their mess - not easy with others recently off duty having a meal in the adjacent half of the mess - but it was a great experience. They are very keen on singing, and everything that could be sung was sung. For the Christmas Midnight, and again on Christmas Morning, we had joint masses for Crew and Passengers - the midnight absolutely packed in a very large Restaurant.with the Crew providing the choir.

These seamen are amazing. They seemed genuinely sorry that we would not be with them to celebrate a New Year Mass. The Port Chaplains from the Apostleship of the Sea ("Stella Maris") give what support they can, but on most of the Cruise Ships there is no full-time chaplain, and P&O invite us aboard only for Christmas and Easter. For long periods of the year the men and women are without the Church's ministrations.
Amazingly, the ships are not long enough in harbour for anyone to get to Mass. Arcadia said goodbye to one set of cruise passengers in Southampton on Saturday morning, and by three the same afternoon the next lot of us were installed. In the meanwhile stores had to be loaded, cabins (more than a thousand of them) cleaned, sheets, towels &c all changed, food prepared and minor repairs effected. It is a huge labour.

Crews of other vessels - tankers &c - have even less shore time, and those who work to keep the merchant fleet afloat are away from homes and families for months on end. Often what they earn is sent back to support an extended family. Yet they keep remarkably cheerful. Look at the crib they made in their mess. It is based on a world map, with the Holy Family in the middle and sheep and others dotted around the continents. You might be able to make out who occupies the British Isles; it is a donkey. They were pleased I had noticed it!

Other Christmas things have been made for the celebrations; an entire ginger-bread village decorated with sweets; and cakes with elaborate icing.most of their lives at sea, yet who have no security


I am writing this chiefly to encourage anyone who can to support the work of the Apostleship of the Sea (Google it for details): and to ask you to spare a prayer for men and women who spend most of their lives at sea, yet who have no security and are engaged just one trip at a time. Their devotion to Christ and his Mother and to the Church is humbling. It is a privilege for any priest to have a chance to serve them, even if only briefly.
We were sad to leave them; hard to realise that less than 24 hours ago we were at Nelson's Dockyard in Antigua

It is a hot topic, priestly celibacy. As a priest of the Ordinariate of Our Lady of Walsingham, I am, you could say, a 'potential' celibate priest. The vows I took on ordination as a Catholic Priest included the promise not to remarry should my wife (absit omen) pre-decease me. I have no problem with that, and I believe that celibacy for many priests is a great blessing, both to them and to the Church.

The question of required celibacy for all priests and Bishops of the Roman Catholic Church, though, just will not go away. The title at the head of this Post is taken from a study by Jean Mercier, CÉLIBAT DES PRÊTRES  which has as its sub-title   La discipline de l'Église doit-elle changer?    ('Should the Church's discipline change?')  Mercier is a journalist working particularly on questions of religion for the French religious weekly "La Vie".  It is not only in Germany that this is a live question. 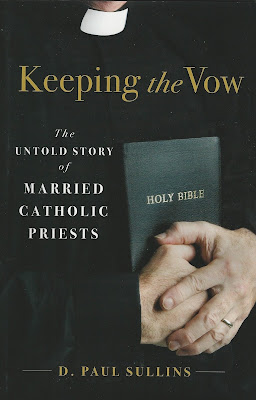 The picture above is from the cover of another study. This is by a Professor of Sociology at the Catholic University of America. In America the Catholic Church has lived with the reality of married priests for many years now. It was in 1980 that Pope Saint John Paul II responded to American Anglicans [Episcopalians] who had sought union with the Holy See. So began the process which became the Pastoral Provision. Accordingly in America there have been married Catholic Priests for more than thirty years. Sullins' book, as might be expected from a Sociologist, looks at the facts and figures of the effect of this momentous change. The Pastoral Provision did not, though, alter the principle of universal celibacy for Catholic Priests. For every married Episcopalian minister to be ordained a Catholic Priest, there has to be a specific dispensation.

I said 'universal celibacy'. Well, it has never been entirely universal.  It certainly was not in the immediate post-Apostolic age ('Now a bishop must be above reproach, married only once' I Tim 3. 2).  The Orthodox Churches of the East have continued down the years to ordain married men, and for centuries the Churches of Rome and Constantinople were undivided. Within the Catholic Church since the Great Schism there have been Eastern Rite bodies, Uniate Churches, which have been permitted to maintain their own discipline in this matter - though in the United States such permission was withdrawn at one time, with the result that many sought reunion with official Orthodoxy. At the Reformation, the marriage of the clergy became a touchstone of Protestant orthodoxy - with the consequent hardening of discipline in the Catholic Church

With Pope Francis' concern for re-examining Marriage Discipline, Divorce and Nullity the question of Celibacy has arisen very naturally. Sullins' book in particular provides some unexpected results. For instance in America he finds that married priests are more conservative than their celibate colleagues on most matters, even including celibacy. They think that priests should generally not be allowed to marry. Perhaps there is need for a parallel study in England. I suspect that the result might be somewhat different. In America, former Episcopalians seem to me to be more conservative not only in religious but also in political matters. In England, I fancy our outlook is less homogeneous. It would be surprising if our Ordinariate priests were of one mind over politics - some, I am sure, will be Corbyn supporters, others will vote Tory. Although too, there are many who belong to the Confraternity of Catholic Clergy, even among them there will be those who hope that the Church's discipline regarding celibacy might be altered.

If your French is not up to Mercier's book, then do at any rate get "Keeping the Vow". It undermines the argument that 'Celibacy makes a priest more available to his parishioners' or that a married priest would cost a parish more than an unmarried one. On the other hand, it also will set you thinking whether the married priest is necessarily more able to respond to people with marital problems - and certainly it shows, as many of us have long believed, that the problems of paedophilia are no more prevalent in the Catholic Church than in other Christian groups.

The Ordinariate, so far as I can see, has no desire to rock and ecclesiastical boat, or upset any ecclesiastical apple-cart. For all that, surely the experience of married clergy coming from Anglican and other churches into the Catholic Church should be a great resource in any discussion concerning the rules about priestly celibacy? Will dioceses, will even Rome, be prepared to listen to these men - and equally to their wives? Perhaps there might even have been some advantage in including one or two married Catholic priests, possibly an Ordinary and an ordinariate wife, in the recent Rome Synod on the Family.