Christ has entered not into a sanctuary made with hands, a copy of the true one … but into heaven itself, now to appear in the presence of God on our behalf Hebrews 9.24
I don't usually post my sermons. Perhaps you will forgive this one-off exception for 11 am on 11. xi. 2018.  The text from Hebrews is printed above. 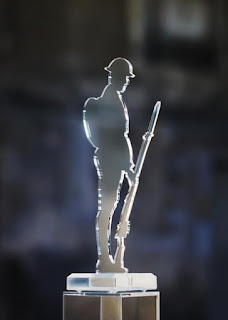 We have had all sorts of stand-ins for the dead of the first world war, some more poignant and moving than others. In other years there have been floods of poppies. seeming to pour over ancient castle walls. This year, torches burning in the moat around the Tower of London. An Artist has made thousands of liitle figures, each different from the next, but all in shrouds laid out in lines. In parish churches, there have been cut-out figures, some in metal, some in cardoard or perspex, occupying the pews where they might on the internet. Perhapsyou will forgive this exceptio have been in life. All have attempted to bring some sense of the scale of the losses in the first world war, but also the individuality of those who died.
The Church has decided there can be a requiem mass for the fallen on Remembrance Sunday; but only if the Mass of the day is also celebrated. Since we have only one mass for the Ordinariate, we are bound to try to combine remembrance with this Sunday's ordinary worship; and it is not difficult. What can help us most with making the connection is in the second reading, a passage from that most enigmatic of New Testament letters, the epistle to the Hebrews. It is not clear who wrote it. At times it has been attributed to St Paul, but it is totally different from everything else he wrote. At other times there have been attempts to remove it from the Canon of Sacred Scripture; but here it is, and today we should be grateful that we have it.
The author looks at the worship of the Old Testament, the worship offered at the Temple in Jerusalem before that was destroyed by the Romans in 70AD. He contrasts it with Christian worship, making it clear that what Jesus instituted was both a continuity with old Israel and also quite new. Today he is telling us that Jesus is the mediator of a new Covenant with God, a new Testament.
The old worship required endless repetitions of sacrifices, of animals and birds. You remember that after the birth of Jesus his parents went up to the temple to take part in that sacrificial worship, offering just two young pigeons rather than the sheep or goats or cattle which wealthier people might have given. It was necessary for the copies of the heavenly things, the Temple and its Services, to be purified with these rites, says the letter to the Hebrews. But that was when worship was only a copy, a stand in, a cut-out replica for the worship of heaven.
Quite different is Christian worship. That is the sentence which began this sermon; Christ has entered, not into a sanctuary made with hands, a copy of the true one... but into heaven itself. It is this true worship which we continue Sunday by Sunday, week by week. Not a repetition of Christ's one, true perfect sacrifice, but an extension of it, a continuation of it. We participate in the death of our Lord when we celebrate Mass; as St Paul puts it, we show forth his death until he comes again. That is why the eucharistic bread and wine, consecratd by the priest, are not stand-ins for the body and blood of Jesus. They ARE the Body and Blood. Just as he said, the IS my body, this IS my blood. 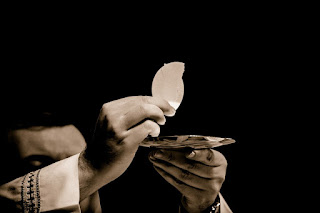 As we offer mass for the departed of two world wars, and the many others who have died in conflicts around the world, we do not need perspex cut-outs to stand in for them. They are here, and with them we are together the Body of Christ, in heaven and on earth.
Nor, says the epistle today, was it to offer himself repeatedly, as the high priest enters the Holy Place yearly with blood not his own, the blood of slaughtered animals. But Christ has appeared once for all to put away sin by the sacrifice of himself. Then the writer to the Hebrews gives us this amazing insight; Christ, he says, having been offered once to bear the sins of many will appear a second time, not to deal with sin but to save those who are eagerly awaiting him. Not to deal with sin, which he has done: but to save those who are eagerly awaiting him. It is a remarkable sentence; look it up in your Bible at home. It is worth reading again and again this last part of chapter 9 of the letter to the Hebrews.

That is how we should see our departed, then, and the fallen of the wars. Not pathetic bloodstained corpses, or figures in shrouds, not perspex cut-outs but young men and women eagerly waiting.... waiting with us for Jesus, victor over death and sin, himself risen and triumphant.

We can't yet know how this will be accomplished, this resurrection at the last day, any more than we can know who will be received into heaven on that day. We certainly know though, for scripture witnesses it, that it is his will that all should be saved; and what God wills is not frustrated by the wiles of men or of the devil. So pray, and pray fervently, that his will may be done, and that we, with our dear departed, may be partakers in the general resurrection. As St John assures us, 'it does not yet appear what we shall be: but we know that, when he shall appear we shall be like him; for we shall see him as he is'. Death does not have dominion over them or us. Thanks be to God for his promise of the forgiveness of sins and life eternal.