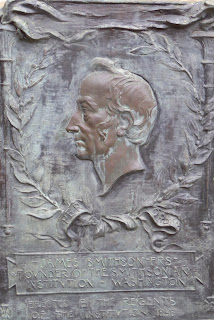 A brief visit to Oxford gave me a chance to call in at my former College, Pembroke. The porters were most welcoming, and expressed amazement that I had matriculated such an aeon ago - in fact in 1955. Now you may not be able to name many of the alumni of that place. Michael Heseltine was an undergraduate there, though it is said that he would slip across the road to Christ Church on every opportunity to give the impression that "The House" was his real home. Among my own contemporaries, Dick Lugar was a Rhodes scholar who became a leader in the U.S. Senate. Then there is a plaque outside the library commemorating a great benefactor of America, James Smithson. If you have been to the States you cannot have missed the many branches of the Smithsonian, from museums in New York to the Zoo in Washington D.C. Again, if you are a devotee of Victorian Church decoration, you will also know the name of Charles Eamer Kempe, whose stained glass occurs in so many churches. 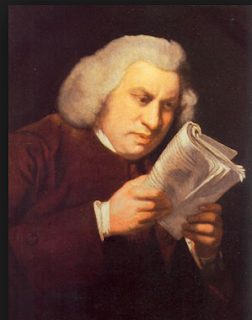 The greatest Pembroke man of all, though is undoubtedly Sam Johnson, the grand Cham, Doctor Johnson of the Dictionary. Because of his poverty, alas, he was only at Pembroke for a very short time, and far from getting a Doctorate then he went down without taking a degree. Yet the College makes much of the association, and even had reproductions made of his tea mug - a vast thing, he must have had wealthy friends by the time hecame to consume such quantitites of tea.

In recent years it was decided to rename the College Chapel. There is a painting in the Reredos of  the risen Christ, so you might have supposed it would be called the Chapel of Christ.That might have led to confusion with Wolsey's college over the road, since it is no longer called Cardinal College/.At any event, it was determined that the name should be "The Damon Wells Chapel".

Was the great Damon Wells perhaps one of the Forty Martyrs of England and Wales? Not so. Then who was he? Google the name and you will find a dozen claimants. This one is a former member of the college, apparently. On a fund-raising visit to the States an atheistically minded Master of Pembroke was, it is said, a little embarrassed to return to Oxford with a great endowment from the said Damon Wells - earmarked for the Restoration of the Chapel. He contnued to be very generous. We cannot know whether his generosity depended on the renaming of the Chapel, but at any event the Chapel now bears his name.

There was a temporary notice planted at the Chapel's entrance on one particular Gaudy night, bearing
the new name. And curiously that was removed during the course of the celebrations - I cannot imagine who did such a thing. Yesterday, on visiting the College, I discovered a permanent notice affixed to the building announcing "The Damn Wells Chapel" - no, sorry, it read "The Damon Wells Chapel". Do visit when you are next in Oxford. But if you go ignore the notice and enter the Chapel. You will see the organ case (Wren's work from the Sheldonian) and a great deal of stained glass, plaster ceilings, and painted statuary, all the work of Kempe. Once there, perhaps you can say a prayer for former students; and include among them, of your charity, Damon Wells. I'm sure he needs it.