Fanaticism - the Ornaments of Churches Considered 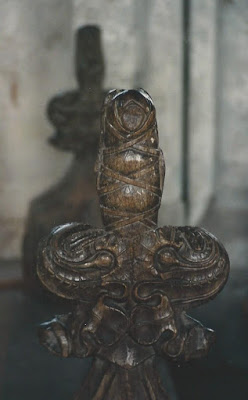 A bench end in, I think, a Suffolk church. A poppy-head, they call it, though that is a distortion of the original term (poupée, doll's head). This is especially doll-like; a carved infant in swaddling clothes. It came to light when I was sifting through old photographs in preparation for a move. But look closely at the doll. It has been defaced, just one among thousands of pieces (we would call them works of art) which were so hated by 'reformers' in the sixteenth century upheavals during the Tudors' reigns, or a century later under the Commonwealth.

This Puritan spirit has surfaced in many churches at many times. It was thriving in the East during the Iconoclast controversy. It spurred on the 11th Century reforms of Citeaux - though the Cistercians built great white-washed barns for themselves rather than destroying the churches of others. 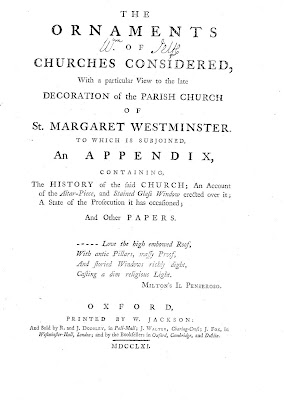 In the eighteenth century there were Parliamentary debates about whether it was fitting that stained glass originally made as a gift from the Dutch to Henry VII for his Chapel in Westminster might be allowed to fill the East Window of the Church of St Margaret Westminster - the parish Church of Parliament. That window had almost miraculously survived from the sixteenth Century, hidden by a succession of guardians; the last Abbot of Waltham, the Earls of Ormond, then Thomas Bullen (Anne Boleyn's father!). At one stage George Villiers, Duke of Buckingham, owned it; and sold it to General Monk, who buried it through the Civil War. When New-Hall where it was installed by Monk fell into decay it was sold again; and eventually was bought in 1758 by a Parliamentary Committee set up to repair and restore St Margaret's.
A little over a century later battles raged over liturgical attire and practice, and whether the Bishop of Lincoln might be permitted to wear a surplice and light candles in his private chapel. So perhaps it should not surprise us that the spirit of Puritanism is also found in Islam. Whether depictions of the Buddha or Pagan Temples in Palmyra, to ardent Muslims these are not works of art, they are an offence to true religion and only fit for destruction. We may not approve of the destruction, whether in our own history or present day Islam, But perhaps we can make a start at understanding people's motives, even if we do not approve of them - what was that about Cecil Rhodes' statue in Oxford?