Today is Our  Lady's birthday; by way of celebration we went to the National Trust property at Kingston Lacy near Wimborne. Not  sure why the National Trust thought it a good idea at one fell swoop  to do the weed-killing of ALL the lawns (thereby making it impossible to sit down ..the seats were mostly in the barricaded areas) and also get the Tree Surgeons in to pollard the Lime Walk, making that inaccessible too. Yet there were crowds of visitors.


The Kitchen Garden is quite a walk from the House (I'd guess originally there were such gardens rather more close - maybe behind the stables) but it was good to see that spare land is being used by locals for allotments. 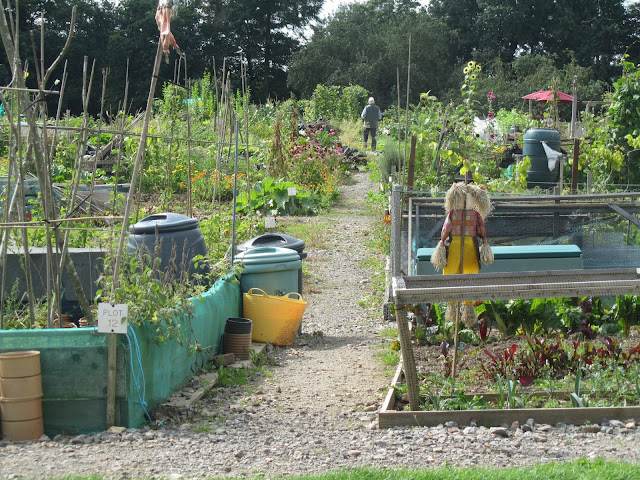 The pigs (a Tamworth, and others un-named which I think are Kuni Kunis) were attracting much attention. 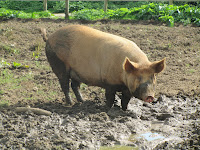 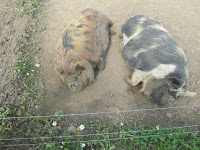 There used to be a great row of Cedars, with stone plaques by them. I recall one with a crowned GIV and others commemorating former members of the Bankes family. They have all gone, swept away by the Trust in a mania of felling (the excuse being that they were dangerous... I think not). 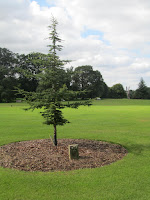 There is now just one plaque beside a rather feeble cedar, on the plaque the feathers of the Prince of Wales and C and a date (1990 is it?).

The House was iinaccessible all morning since the tickets for conducted tours had all gone. It was to be a free-for-all in the afternoon, but we have visited often so contented ourselves today with the gardens.

There is a 'Japanese' Garden, supposed to be a recreation of a previous effort by some misguided 19th Century member of the family. It is very unfortunate, and looks most out of place. There is a stagnant pond, with a non-functioning waterfall (or at least I suppose that is what the pile of rocks is meant to be). A lot of black paint, too. I thought the Japanese used red on their buildings? The whole effect is very dull, but visitors dutifully admire it because it is listed as an 'attraction'..

So a happy day, of mixed fortunes. I have tried to post some of my misgivings on the facebook page of Kingston Lacy, but I daresay they will not appear. Can't really blame them - but I do hope they might take some of it to heart. The gift to the National Trust by the Bankes family was I think the largest they have ever received. It included not just Kingston Lacy, but also Corfe Castle (stoutly defended by Lady Bankes against the Roundheads, while her husband was away fighting for King Charles) and the great sweep of beach and its hinterland at Studland Bay.

The National Trust generally does a pretty good job; but I hope their management are prepared to listen to criticism as well as praise.
Posted by Edwin at 14:19