Sometimes – not very often – I have GREAT THOUGHTS; about the sweep of history, about the place of the Church in the present age, and where history is leading us. 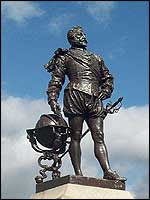 I grew up in Plymouth (England): whence the Pilgrim Fathers set of for the New World; and whence Francis Drake, after finishing his game of bowls, went off to finish the Armada. His statue on Plymouth Hoe bears the inscription “He blew with his wind, and they were scattered” - claiming that the defeat of the Armada was proof of God's love for England and the Church of England. All this I gladly accepted: with the caveat that the Church of England was really the Catholic Church of this land, just 'with it's face washed'. We were truly Catholic; had not the Archbishop said that “The Church of England has no Doctrine of its own,only the Doctrine of the Catholic Church”? 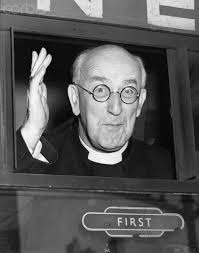 And that Archbishop was Fisher, the headmasterly pontiff who was no friend of Anglo-Catholicism.
Little by little, my doubts about this 'catholic' Church of England began to grow. Throughout the nineteenth century the ideas of the Tractarians had taken hold, despite a Protestant backlash. By the mid twentieth century, we were in serious conversations with the Roman Catholic Church; but by the time I was a member of the General Synod I saw back-tracking. Instead of the ARCIC agreements, the bulk of the CofE seemed happier with the Lima accord. We were all baptized, so we were all the same really. Then came Porvoo and the agreements about the interchangeability of ministry with Scandinavian Lutherans.

But the rapprochement with the Catholic Church still had an impact; from York Diocese the Archbishop sent a little delegation to Mechlen/Brussels, to remember the Malines Conversations, and I was a participant. Perhaps the tide was still flooding towards Rome?

Then, the Ordination of Women to the priesthood was approved in Synod with the necessary majority of two-thirds, though it was a close-run thing. A Cardinal had been invited to speak about how Rome regarded what we were doing; he warned us that our choice would either be for a Catholic Future or a Protestant one. The majority opted for the Protestant course. 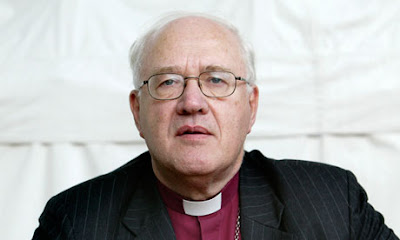 I was asked by George Carey to help in holding things together. I would only do so if what the C of E was doing in ordaining women was reversible. Synod had said that nothing could be final until the whole Church, Eastern and Western, agreed. Since that awaited the Greek Kalends, I became Bishop of Richborough. It was a battle. In the parishes, I was well received; after all, the people had asked for me to be their chief Pastor. In the House of Bishops it was very different; and the Dean of Westminster, where I had been consecrated, expressed his outrage that I continued to be opposed to women's ordination. 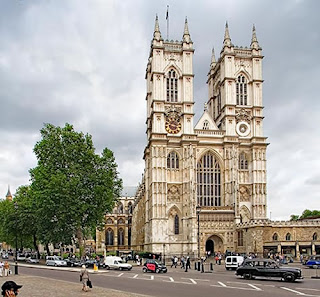 He had thought my job was to persuade reluctant Anglo-Catholics to join the majority. Not so - in my innocence, or foolishness, I still believed that the Church of England was what it claimed to be, part of the One, Holy, Catholic and Apostolic Church – and that the task of Anglo-Catholics was to convince other Anglicans that our church was NOT Protestant.

Since my retirement that has become increasingly impossible. The Church of England has decided that it can determine the doctrine of Ordination, and despite the protestations of Rome and Constantinople it believes all doctrine is at the disposal of a General Synod of the Church of England. Indeed, the law has declared that is exactly where the Church of England stands. It is perfectly capable of altering any doctrine, not just concerning Holy Orders but even about the Holy Trinity or any other part of theological belief. Synod is sovereign.

So from the Nationalisation of the Church by Henry VIII and Elizabeth the State Church has veered ever further from its catholic origins. Meanwhile Catholicism in England has battled, and grown, and flourished. Persecution and penal laws gave way to a grudging tolerance in the 19th Century. In the twentieth a reigning monarch even made an official visit to the Pope. From a trickle of converts in the 1840s there has become a flood in the present age. I am told (can it really be so?) that a quarter of the Catholic Clergy in England began as Anglicans. Now as a Catholic priest I can say a mid-week Mass when there are forty or fifty Communicants – not in the middle of some great city, but in a little country church. Yet such numbers would be thought wonderful at a Sunday celebration in many large Anglican churches.
What began with the Caroline Divines in the 17th Century, blossomed with Newman in the 19th, and looked ready to recall the Church of England to her catholic origins has come to a grinding halt. Perhaps all that was necessary to prepare the way for a great Catholic Revival in England. How much longer will the Established Church be able to hang on to its heritage of buildings? How long before Parliament sees that it would only be reasonable to share out the proceeds of the Reformation once more? There seems to be a great appetite for History, evidenced by TV programming. When our compatriots come to understand that “we wuz robbed”, that the great Abbey and Cathedral Churches of England were designed and built by Catholics for Catholic Worship, and would be better used by Catholics today, then perhaps some of the blessings of the Establishment might be shared rather more fairly. 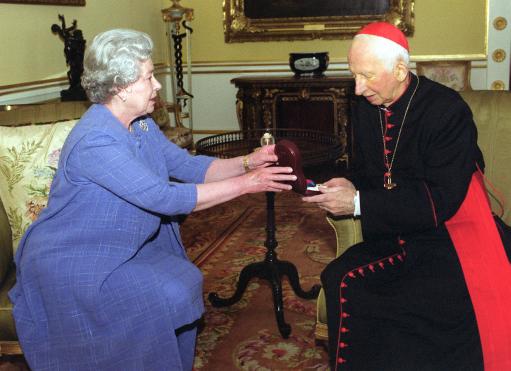 It is said the Queen used to refer to Cardinal Hume as “My Cardinal”. How long before an English monarch really does acknowledge the Catholic Church as the authentic church of this land? In the sweep of history we have only been a nominally Protestant Nation for five hundred of our two thousand years of Christianity.
Posted by Edwin at 13:59