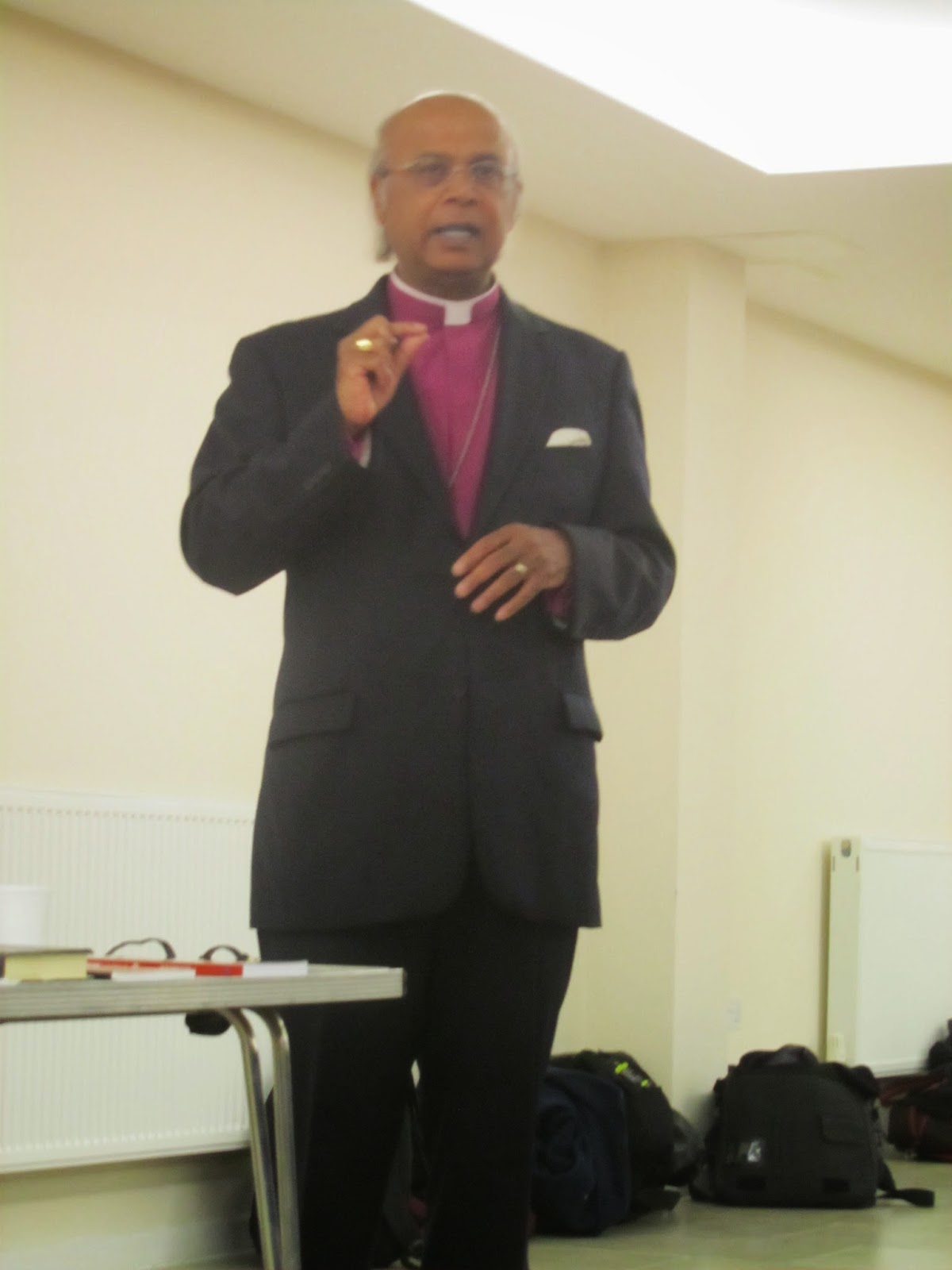 Today priests of the Ordinariate met in St Patrick's Soho to hear Michael Nazir Ali - and what a tour de force it was. He began by reminding us of the rapid growth of the Christian Faith throughout the world over the past century. In Africa and East Asia that growth has been phenomenal. It is only in Western Europe that the churches are in decline.

He then went on to speak of world Islam, its diversity in different regions, and the reasons for its animosity towards particularly Israel and Christianity.

He talked enthusiastically of the challenge for the Catholic Church - to be more open to diversity (and the Ordinariate was a good sign in that direction) and to different expressions of faith coming from different ethnic and cultural situations. We threw all manner of questions at him, even challenging him to join us in the Ordinariate - and it was apparent that we have a great friend in the former Bishop of Rochester. He wants us to  reach out of our former Anglo-Catholic comfort zone and realise there are many evangelicals who are well disposed towards the Catholic Church and need us to encourage them.

We chatted away over lunch - this is one of the best features of these occasional meetings - and then  heard from the Ordinary.He made a special plea for loyalty from all of us; loyalty to the Ordinariate ideal, for which all of us had made oaths on ordination, and without which many of us would not have been ordained at all in the Catholic Church. We should have left our 'only doing what I like' behind us. It is not every Group which will eventually use the Ordinariate Rite - but we should all give it at very least a decent trial run.

Mgr Andrew spoke briefly about  liturgy, our Communications wizard Catherine Utley said what a very good communicator we have in Mgr Keith, and how easy it is to work for him compared with some other clerics - and politicians. I think we suspected that already, but it was good to have our view endorsed by a media professional. Cyril Wood, our Treasurer, was present throughout and both he and Mgr Keith told us once more of their concern for a proper sick and retired fund to be built up.

For me one of the most important contributions of the day was from a priest who has been given a diocesan parish to run. It had been built up by
clergy who were totally swept up in the post Vatican II euphoria - which had led them to misinterpret what the Council said so they supposed guitars and popular music, however banal or even explicitly anti-Christian, were of the essence of worship. He is having a hard time reminding his people that they are Catholics, and that they are not at liberty to ignore the Catechism or the Instructions on the Roman Rite. This resulted in Ed Tomlinson (do look at his blog) saying that he had dealt with a similar spirit of indiscipline by placing on the altar on his first Sunday the Missal,the Bible and the Catechism of the Catholic Church and telling folk that this was what they would be getting in future. Those who chose to leave were surprised to receive a letter from Fr
Ed congratulating them, saying they would have no difficulty in finding somewhere to their taste. He has stuck to his guns, and the parish has grown greatly because of it. It was good though to be reminded what considerable difficulties - real antipathy - some of our Priests receive. Most of us, though, are more fortunate and the 'cradle catholics' we minister to are appreciative of us and what we do for them.

We are all hugely grateful to our Ordinary for giving us these opportunities to meet and exchange views, and to listen to some outstanding theologians. Next time we meet, on February 12th 2015, it will be in Westminster with an opportunity to concelebrate with the Cardinal at the Cathedral's 5.30pm Mass. That day the Ordinaries from the USA and Australia will be with us so if you are a priest who might have been present today but had recently bought an Ox or married a wife maybe next time you will remove all obstacles and join us. It really is a very encouraging occasion.